The High Desert: a living land of beauty and desolation

A desert thunderstorm near the Dove Springs OHV area.

East of the Tehachapi Mountains lies the Mojave Desert, a 48,000 square-mile expanse that is one of the great deserts of the world. It is one of the wetter deserts on Earth and is home to nearly 2,000 species of vascular plants.

The region near to Tehachapi is commonly referred to as High Desert, since the average elevation is above 2,000 feet – people are often surprised to learn that the town of Mojave, at 2,762 feet, is about 150 feet higher in elevation than Keene at 2,602 feet.

The High Desert is a land of little rain and lots of stark beauty and memorable landscapes, and its communities include Ridgecrest, Randsburg, California City, Mojave, Boron, Rosamond, Lancaster and more.

Cartographer Dr. Henry DeGroot made extensive travels through the deserts of Arizona, Nevada and California in the 1860s. Though others reproduced his work without attribution or royalties paid, DeGroot made accurate maps credited with saving the lives of many desert travelers who were able to rely on them. He wrote this desert description:

"It is a land of contrasts, extremes and apparent contradictions, of mingled barrenness and fertility, beauty and desolation, aridity and storm."

Now that fall has arrived along with cooler temperatures, it is a good time to visit our neighboring desert and experience some of "beauty and desolation" that can be found there. There are many Mojave Desert places to visit that are only a short drive from Tehachapi, from Red Rock Canyon State Park to Jawbone Canyon to the historic mining town of Randsburg and many more.

So take some snacks and plenty of water, and go explore what the Nuwä Indians of Tehachapi called the taviskwep tiip (pronounced tah-vee-skwep teep) – "the sun-dried land."

"The desert, when the sun comes up. I couldn't tell where heaven stopped and the Earth began." –Tom Hanks 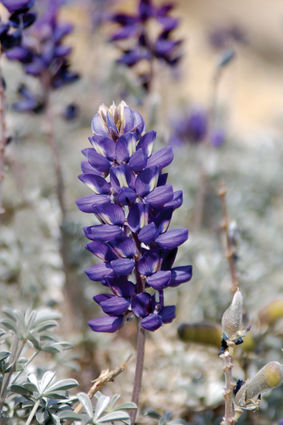 These lupines, often called Grape Soda Lupines because of their faint Concord grape-like aroma, grow in the hills overlooking the Mojave Desert like this one in Oak Creek Pass.

"The world's deserts have been perceived as places of magnificence and mystery, silence and contemplation, inspiring novelists, poets, artists, and film-makers. . ."

"Deserts have long captured our imaginations with their inaccessible and inhospitable nature. Even a casual visit to the desert will expose an individual to feelings of vastness, solitude, and one's own frailty."