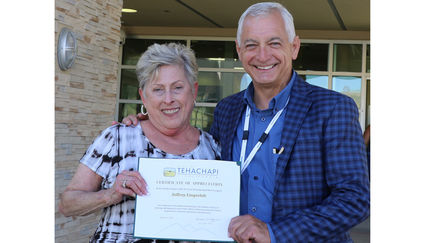 After three years with Adventist Health Tehachapi Valley, hospital President Jeff Lingerfelt announced that he and his wife, Jenny, would be moving to Virginia to be closer to their families, and his last day at the hospital would be Aug. 7.

Lingerfelt said that they are sad to leave Tehachapi and have very much enjoyed being a part of our community. He will be taking over a small county hospital located about four hours from his parents' home.

"My parents are getting older," said Lingerfelt, "and with the Coronavirus pandemic, I feel I need to be closer to them. It was the hardest decision I have ever had to make."

During his tenure at AHTV, Lingerfelt spearheaded the final construction stages of the new hospital and the massive move from its old facility on E St. Under his management, AHTV went from one of the lowest rated hospitals to being in the top 25 percent of hospitals in the country with positive ratings from 80 percent of patients. Under his management, the AHTV Foundation was formed as the fundraising arm of the hospital responsible for funding new equipment and much of the artwork that hangs in the hospital corridors.

Speaking at a recent Tehachapi Rotary meeting Lingerfelt outlined plans for the hospital including a new imaging center for which they hope to break ground in the near future and have operational by next summer. He also thanked Rotary for their gift of teddy bears for the youngest patients.

AHTV Foundation Manager Christina Scrivner said, "We really needed Jeff when we had him. He is the best boss I have ever had and will be deeply missed."

At the Aug. 3 Tehachapi City Council meeting, Mayor Susan Wiggins presented Lingerfelt with a Certificate of Appreciation from the City of Tehachapi. As the meeting was held telephonically, the presentation was actually made the Thursday before the meeting.

Lingerfelt thanked the Council and said he hopes to be able to return for the groundbreaking of the new imaging center. He will be replaced by Sam Itani who has worked with Adventist Health in Bakersfield for 23 years, including the cancer center and imaging center.