'Bound by War: A memoir of Love, Friendship and Survival' 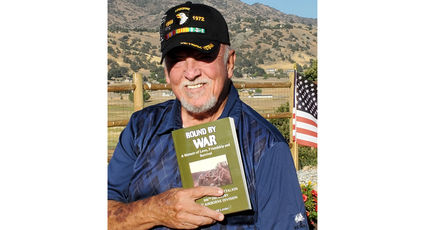 "Bound By War: A Memoir of Love, Friendship and Survival" was released last month, authored by Todd Lander, a resident of Bear Valley Springs for more than 19 years.

Just before his 20th birthday, Todd was drafted into the U.S. Army in December 1967. After his initial and airborne training he was sent to Vietnam to be a grunt with the 101st Airborne, to spend a year in the jungles and rice paddies of Vietnam during the most tumultuous time of the war.

Friendships were made and lost that year, while he survived horrendous conditions and several close calls with death. He credits much of his survival to his undying faith in God, along with his great desire to make it back home alive to his sweetheart, Sandy, whom he married 21 days before being deployed.

The book includes redacted letters he wrote home to his new bride, as well as declassified after-action reports on some of the battles in which he was involved in. This is a heart-wrenching account of the horrors of war, the power of young love and a young man's overwhelming desire to survive.

Todd retired from the Los Angeles Sheriff's Department after serving 30 years, and currently is a director with the BVSA board for which he has served for more than 10 years. He is an active member of the Bear Valley Springs veterans Association, in addition to being active on a number of online veteran sites. He and Sandy have been married for over 52 years.

"(Todd) puts the reader on the ground alongside himself and his fellow grunts. Read this book, and you, like those who have been there and done it, will never be the same," said Dan Bronson, Bear Valley Springs resident since 2003.

Linda Coverdale, Bear Valley Springs resident since 2003, said, "This is a book that has moved me from tears in one chapter to a hearty chuckle the next. It is heartfelt, dramatic, and most importantly, a true life experience."