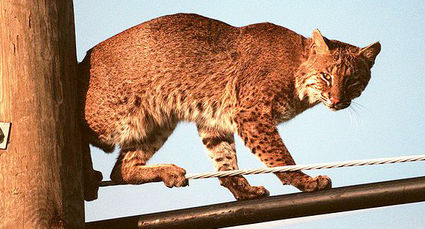 I went to work at the Tehachapi Post Office one morning a few years ago, and pretty soon one of the other workers came in and said there was a bobcat underneath one of the cars in the employee parking lot. Most of the other workers were kinda scared and were peering out from the doorway, which was silly because bobcats don't normally attack people, unless they're trapped. I went outside because I wanted to get a better look. It was obviously a young one, and the bobcat was more alarmed than the people inside, who wouldn't come out. Finally, the postmaster at the time came out and dropped a metal BBQ lid on the ground, which made a loud noise and the young bobcat took off like a shot, back up into the hills. He wasn't there to cause trouble or mail a letter; he was just lost.