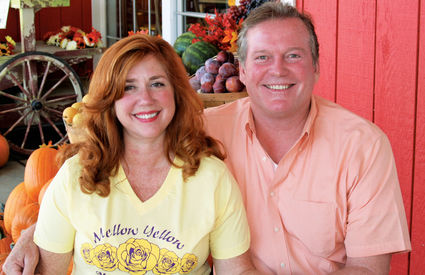 Vickie and Steve Murray are the friendly, innovative owners of Murray Family Farms.

Although the pandemic has, at least temporarily, caused many changes in daily life, many things remain dependably true. Like the fact that one of the most vibrant, friendly farms in California is located right here where the Tehachapi Mountains slope down to join the rising San Joaquin Valley. This is Murray Family Farms, an agricultural oasis including more than 170 varieties of fruit trees as well as berry vines and row crops that keep the Big Red Barn stocked with fresh produce year-round.

The large welcoming farm market, which includes a kitchen serving tasty food made from ingredients grown on site, a petting zoo, picnic area and much more, has become a must-stop location for both area residents and travelers on Highway 58. This triumph of American agriculture is called Murray Family Farms and the owners, Steve and Vickie Murray, helped redefine the concept of a visitor-oriented farm.

The Murrays have been farming in Kern County for 30 years, initially gaining fame for their cherries, which were mostly raised for the export market. They decided to try selling some of the remaining crop at farmers markets, and enjoyed the experience. "Farmers markets are really fun," Steve noted. "We like connecting directly with our customers and with chefs who will use our produce."

Since the Murrays lived and grew cherries on General Beale Road, only four miles from State Highway 58, they decided that a direct farm-to-consumer market had potential, so they finally convinced well-known Kern County ag men Birch Berthold and Jimmy Icardo to sell them property at the Gen. Beale offramp. "They worked with us, and we were able to get the land and make the project happen," Steve explains.

The development of the farm and market has been continual, creative and gratifying to watch. The little trailer that once housed the fruits and vegetables was replaced by the Big Red Barn, a spacious and inviting structure that's big enough to house the ripe produce, dried fruit, nuts, jams, jellies and other retail items as well as a small dining area and the Cal-Okie Kitchen, a commercial kitchen and bakery that went into full operation in 2011 with an ever-expanding line of offerings. And that's just inside the building.

Outside, the Murrays have kept coming up with fun activities to engage families and make a visit to Murray Family Farms entertaining and memorable. Although farm tours have been on hold for the past few months because of the pandemic, they anticipate opening soon. In addition to the petting zoo with assorted farm animals and bird cages housing chickens, pigeons and a flock of beautiful Indian Peacocks, there are hay rides, the opportunity to pick your own produce, and an assortment of fun activities for kids.

The outside entertainment reaches a crescendo during the entire month of October, when Murray Family Farms wholeheartedly embraces autumn with the Fall Family Fun Fest. The place becomes a pumpkin palace, with a 3-acre corn maze, rubber duck races, pumpkin painting, paintball guns, potato launcher and a corn cannon that fires ears of corn. The Murrays have kept adding fun attractions, like the Mt. Murray Slide and Ride, and the Big Boo and Baby Boo slides. A year-round favorite is also the giant jumping pillow: a 66-foot by 33-foot liquid-filled pouch that functions like a trampoline or bounce house on the ground. Halloween at Murray Family Farms has become a Kern County tradition.

Steve and Vickie are a compassionate, energetic couple whose positive leadership infuses the Murray Family Farms operation. Their nimble business sense and willingness to keep experimenting and implementing new ideas has turned their family farm into an economic powerhouse in this pocket of Kern County – the company employs more than 100 people year-round, and during the height of fruit picking hundreds of people are at work in the orchards and fields.

An example of their innovative thinking: October was once the slowest month of the year for them, and thanks to the development of the Halloween pumpkin patch experience, it's now the busiest. "We have 20,000 people stop here during the month of October," Steve says "It's really amazing. There are times when all of our parking areas are completely filled."

The Murrays have two children – Steve Jr. and Katie – who are involved in the family's farm operations. Another much-loved son, Sean, also was involved in the farm but sadly passed away several years ago. Murray Family Farm operations include another retail outlet called the Little Purple Barn, which is located along Interstate 5 south of Bakersfield on Copus Road by the Grapevine. The Murrays also have their produce in 35 different farmers markets a week in the height of the season, including venues as far away as Palm Springs. It can all be a little dizzying at times, but the Murrays manage their many-faceted operation with grace and good spirits. They both came from economically humble origins, in Steve's case his father died young and the family had to rely on food stamps for a time in Steve's youth, but they have made their dream a reality with hard work and patience. 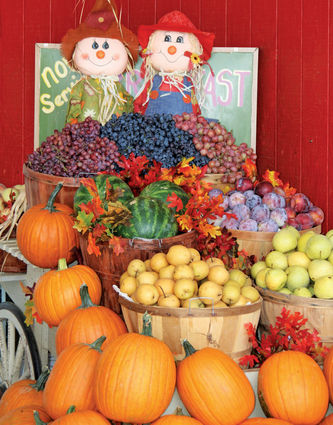 Murray Family Farms has produce year-round, though in autumn it is a headquarters for Halloween fun.

"It continues to be a walk of faith for us," Steve admits, "Our wholesale farming profits subsidized our retail investments, but we believe in what we're doing and thanks to our wonderful employees and customers, we've been able to enjoy success." The Murrays' stated mission includes these intentions: "To create a wonderful on-the-farm experience, to offer meaningful entertainment and fond memories, and to exemplify old fashioned friendly service and family values," among several other commendable goals. A visit to the cornucopia that is Murray Family Farms will quickly show how they've been able to stay true to their vision.