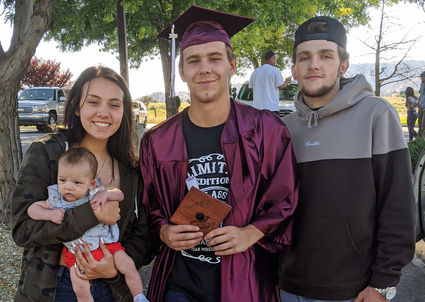 Fredrick Ames and family. Fredrick is holding the plaque that Mrs. Frechette made for all of the graduates.

The students are each assigned a dedicated teacher with whom they meet at least once weekly. The Academy has 12 different campuses located in San Bernardino, Riverside and Kern counties. The goal of the Academy is to promote the academic success of every individual student and to provide a safe, nurturing, intellectually rigorous and relevant educational experience.

Tehachapi's local Mojave River Academy campus, located on Sage Lane, held two Senior Recognition ceremonies, one at 1 p.m. on June 10 and 5 p.m. on June 11. In ordinary years, seniors from all 12 campuses attend commencement exercises in San Bernardino County at the Redlands Bowl in Redlands, Calif. Since the date of commencement exercises is currently unknown in this extraordinary time, the administrators and teachers at MRA wanted to honor all of the graduating seniors for their hard work and efforts, so they decided to hold two recognition ceremonies. A vehicle parade proceeded one by one to the designated recognition site where each senior was individually congratulated by Center Administrator Principal, Dr. Matthew Ross, and the student's teacher. Tiffany Frechette, Math and Independent Study teacher, made beautiful wooden plaques for the graduates upon which they are able to hang their tassels and attach their diplomas. Four of the graduating seniors are also leaving very shortly to begin their military careers.

Participants in the June 10 Recognition Ceremony:

Participants in the June 11 Recognition Ceremony:

Senior Rory Bishop has enlisted in the Marines. His MOS is 03 – Infantry. 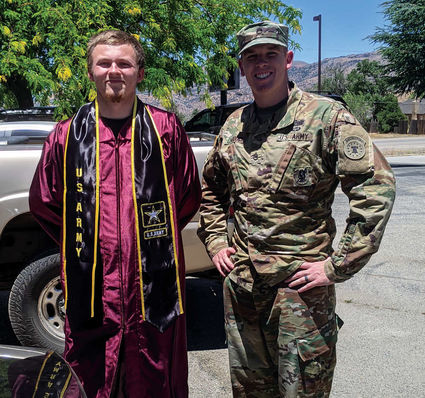 Senior Christian Steiber joins his older brother in the Army. His MOS is 12 Whiskey, Carpentry, as is his brother's. Because he earned the rank of Eagle Scout on Oct. 9, 2019, he enters the Army as an E2 (Private Second Class) instead of an E1. Christian graduated with a 4.0 GPA.

Senior Frederick Ames will very shortly be departing for the Marine Corps Recruit Depot (commonly referred to as MCRD), the Marine Corp. Boot Camp in San Diego, Calif. He is uncertain at this time as to his MOS.

Additionally, Joseph Gollehon graduated a year early while keeping his GPA up to attend a lineman program in Idaho.

Both ceremonies were very exuberant occasions with relatives honking, music playing, applause and many photo opportunities. Congratulations to all of the Mojave River Academy graduates! It was a tough final semester but you all prevailed!