Raccoons: clever and curious masters of the night

A young raccoon that took to the safety of a tree on Brentwood Drive when startled by barking dogs.

As I drove slowly through the quiet, older residential streets east of Downtown Tehachapi, my headlights shown on a furtive figure in a mask who hurried across the road. It wasn't a person observing social distancing in the time of the coronavirus pandemic, but it was a local resident: a large raccoon, out for some late night foraging.

These interesting animals are mostly nocturnal and tend to conceal themselves in hollow logs, trees or other hiding places during the day. Raccoons emerge at night to forage and explore, and those living near houses occasionally create mischief in homeowners' yards.

Although typically described as being carnivores, raccoons may be the most genuinely omnivorous mammal in North America, eating a diet that is a mixture of invertebrates, plant material and vertebrates. Raccoons will consume earthworms, frogs, fish, berries, acorns, bird eggs, cat food and much more.

Raccoons (Procyon lotor) readily adapt to human habitation and they are common in the outlying wildland urban interface, in places like Bear Valley Springs, Stallion Springs, Golden Hills, Alpine Forest Park, etc. And as locals can attest, in the City of Tehachapi as well. Raccoons go unseen by most residents, who may awaken in the morning to find that something has cleaned the fish out of their fish pond or perhaps peeled back the lawn in places to catch worms.

Years ago when we raised sweet corn for sale at our place on Cherry Lane, raccoons used to visit the cornfield at night sometimes to strip down young ears of corn because raccoons love sweet corn, especially when it is still in the milk stage before the kernels harden. Raccoons are responsible for more damage in cornfields than any other animal. They are also one of the main wild destroyers of chickens, and may slaughter a dozen hens in single night. Especially in the mountainous areas, you either have a secure hen house that is closed every night, or you don't have chickens.

With their mottled gray and black fur, black mask with white facial highlights and ringed tail, raccoons are very easy to identify. They average between 8 and 20 pounds when full-grown, with males generally larger and heavier than the females. Raccoons can occasionally reach 30 pounds, and the confirmed record for a wild raccoon is reportedly 62 pounds, which is stunning.

One of the most entertaining things about raccoons is their manual dexterity - though they don't have opposable thumbs like primates, they have no webbing between their front toes, which is rare for a mammal, and this allows them greater flexibility and range of motion.

Watch a raccoon for even a short time and you're likely to see it using its dexterous hands to grasp items. I sometimes refer to them as "mountain monkeys" because with their size, love of trees and climbing, their agility and their intelligence, raccoons are the closest thing we have to monkeys in these mountains. Research has indicated that raccoons' intelligence rivals that of smaller primates.

Raccoons have found their way into American culture: the Beatles released a song in 1968 called "Rocky Raccoon" about a person, and the name inspired a Marvel Comics character who was a raccoon named "Rocket Raccoon." This in turn led to a raccoon character named Rocket who is one of the most popular cast members in the Guardians of the Galaxy film franchise.

The name "lotor" in the raccoon's scientific name means "one who washes" in Latin, and it refers to the tendency of captive raccoons to wash their food or at least douse it with water before eating it. This behavior has seldom been observed in the wild and some researchers believe that confined raccoons are recreating the conditions of actually foraging and hunting in a creek or other water source.

The Nuwä (Kawaiisu) Indian word for raccoon is pahayaazi, pronounced pa-ha-YAA-zeh. The initial part of the name uses paa, a word for "water" recognized by all the various dialects within the Numic or Paiute language family. Animals whose names start with paa, like paa-aya (pond turtle) or paara-huyi (tule elk) are typically associated with water.

The little creeks and riparian corridors around Tehachapi are like a highway system for raccoons, who will live in almost any North American environment as long as there are trees for them to climb when threatened, and it isn't too dry. Creekbeds of willow, cottonwood and sycamores provide cover and water and relatively safe traveling conditions for raccoons.

Although raccoons are often described as "solitary," most of the ones I encounter are small family groups of a mother and her 2-6 offspring, and they are known to form small social groups of a few adults as well.

Touch a raccoon, lose a digit

Though raccoons are cute and entertaining, they are not cuddly. I can recall when a local wind farm employee attempted to remove a raccoon from a leghold trap without waiting for the trapper, and by way of thanks had a portion of his thumb bitten off by the trap's raccoon occupant.

Raccoons are simply not fit to fool with and they can usually hold their own against the average dog, though climbing trees to escape pursuers is their favored means of defense. Raccoons are not usually aggressive and can act half tame, even coming in through cat doors to help themselves to dry cat food. It's best not to crowd them, however, and wise to watch from a little distance.

Raccoons started showing up at night on the east patio of the Lodge in Stallion Springs when the place opened more than 40 years ago, and the last time I was there for a special event, there were still some raccoons coming around after dark. 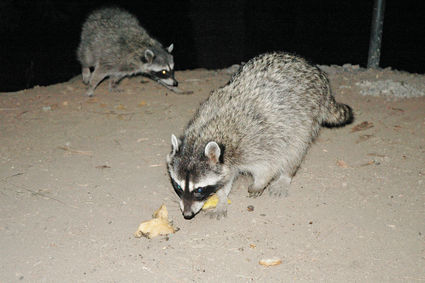 Raccoons at Tehachapi Mountain Park discover leftover melons to be a welcome find.

Raccoons have well-developed vision, hearing and touch senses that enable them to navigate the night when other creatures are asleep. These smart and successful animals have managed to adapt to the presence of people, and have continued to thrive in the age of humans.