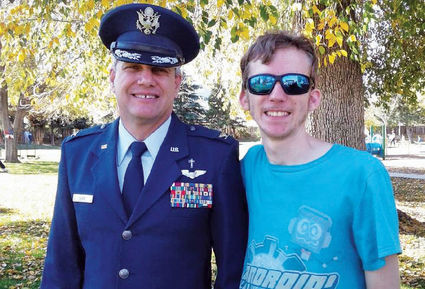 In the late summer, Mary Bowman observed a young man mowing the weeds in a vacant lot behind her house on Sherwood Place. As she did not recognize him, she inquired through Facebook as to the young man's identity. She learned that he was a neighbor living just down the street, Warren Clare, the son of Father Wes Clare of St. Jude's in the Mountains Anglican Church, and his wife, Wendy.

Bowman was very impressed with Clare's altruism. She had also observed that he was mowing with an old, borrowed push mower. She conceived of starting a GoFundMe account to purchase a new mower for Clare. The fundraiser brought in over $1,000 which allowed Bowman to purchase a self-propelled Toro mower for Clare. Additionally, when she mentioned to the salesperson at Home Depot that the purchase was for a young man who was selflessly giving of his time and resources to mow vacant lots in their neighborhood, Home Depot authorized a $100 discount on the purchase of the mower. Clare is able to keep the remainder of the funds in reserve for gas and maintenance.

On October 10, 2019 the presentation of the new lawn mower to Clare was covered in an interview with Bakersfield's Channel 23.

Since he was about 13 years old, Clare, who is autistic, has been inspired to take up whatever activity his father is doing. He observed his father mowing weeds in the neighborhood vacant lot so that the weeds would not catch on his clothing when he ran and Warren decided to begin mowing as well. His motivation was also to preserve the poppy flowers, give neighborhood kids an area in which to play and to remove brush that could potentially cause or spread wildfires.

With no weeds to mow during the winter, Clare has been shoveling snow in the neighborhood after the occasional snowstorms.

Clare is described by his mother as a concrete thinker for whom dates hold a special significance, like the first day of spring or the first day of summer. She is anticipating that as the weeds start sprouting in April and May her son will be working around the neighborhood with his shiny new lawn mower.