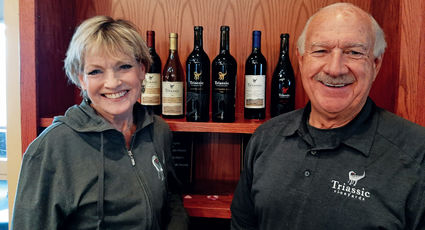 Jim and Sally Arnold with the award winning wines from the 2020 SFCWC. Front and center are Best of Class Big Bang and Double Gold winner Triassic Rocks.

Triassic Vineyards has won awards at the San Francisco Chronicle Wine Competition every year since 2015 and this year was no exception. Vineyard owners Jim and Sally Arnold announced that Triassic brought home six awards from the 2020 competition that was held in early January. Their 2016 Big Bang, a red blend with Zinfandel as the lead grape, brought home Triassic's first Best of Class award, being number one out of 44 award winners in that class. The San Francisco Chronicle Wine Competition has over 7,000 entries annually from as many as 35 states and in 2020 there were 180 Best of Class winners.

Wrote long-time SFCWC judge Mike Dunne in his comments on each Best of Class winner: "Triassic Vineyards 2016 California Big Bang: The only thing not uncommon about this blend is the blend itself – 67 percent Zinfandel, 33 percent Petite Sirah. The ripe and vigorous fruit that went into the wine was grown in an area not exactly recognized for vineyards, the foothills of the Tehachapi Mountains near Cummings Valley, just northeast of Interstate 5's Grapevine. What's more, the vineyard sits on a ridge that dates to the Triassic period, thus the name of the winery."

According to Arnold, this is the first time their wine has been recognized as coming from Tehachapi, bringing our area a step closer to being recognized by the wine industry. Arnold says it is his goal to be an ambassador for the Tehachapi winegrowers and educate the industry about the quality of our grapes; the ripe, vigorous fruit that grows here. To this end, Jim and Sally Arnold will travel to San Francisco on Feb. 15 to pour their wines at the San Francisco Chronicle Public Wine Tasting where over 1,500 gold medal wines will be available for tasting.

In addition to the Best of Class award, Triassic Vineyards also received a Double Gold for their 2016 Rocks, a blend with Syrah as the lead grape, Silver for their 2016 Zinfandel and 2018 Viognier, and Bronze for their 2016 Syrah and 2016 Legacy, a red blend of Zinfandel, Syrah and Tempranillo. 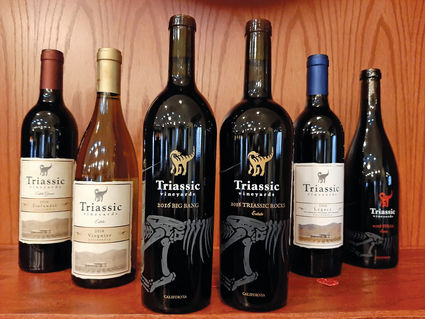 In July of 2017 the Tehachapi Winegrowers Commission with the assistance of Julie Bell of Per La Vita LLC submitted an application with the U.S. government to be designated an American Viticultural Area (AVA). As of January 2020, the application to be known as Tehachapi Mountains AVA is 14th in line for approval and could possibly be approved this year. In the meantime, we are known as a California wine area. Jim Arnold, representing the Tehachapi Winegrowers Commission, said "It is our goal for the winegrowers to work together to promote Tehachapi as a wine growing region. Any recognition gained by one of our local growers benefits all of the winegrowers in Tehachapi."