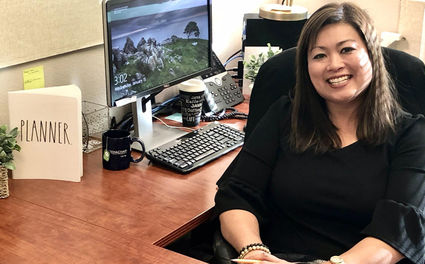 Tehachapi has a new City Planner. Her name is Kim Burnell and she comes to Tehachapi with 16 years of planning experience from Riverside, Orange County and Los Angeles. Burnell grew up in Riverside County with a love of horses, dogs and music. She sang in a chamber choir and played French Horn in her high school marching band and clarinet in concert band. She attended University of California Irvine and graduated in four and a half years with three majors. She said that at that time she was not sure which direction she would take. As a result, she holds Bachelor's Degrees in Urban Planning, Criminology and Psychology. Her first planning position was with Riverside County in 2004, a job she held for five years. "I had a lot of firsts in Riverside," said Kim. "My first car, my first planning position and my first condo."

Several public and private sector planning positions around Los Angeles and Orange County honed her skills. Then 10 years ago, while working for a small private land planning company in Orange County, she met and married Barry Burnell, a botanist and land use planner. They had much in common with their love of animals, cooking and music. Kim said that at one time Barry hosted underground jazz concerts in Orange County with food and wine. He still plays keyboard with a group in OC. They also breed and show Weimaraners, those beautiful gray dogs with the light colored eyes. Kim said that she also has a 10 year goal to take one of her dogs to the Westminster Dog Show. She still volunteers with a Weimaraner rescue she helped found in 2014. She said she has fostered over 100 dogs in the last five years.

Last year, when a project in Downtown Los Angeles came to an end, Kim took a short break knowing that by end of summer she would need to go back to work. She said she did not want to take another job in the city. She saw the City Planner position in Tehachapi posted and came to check out the area. On her first visit, she thought she just might belong here. She loved the cooler weather, perfect for hiking. She was impressed by the way Tehachapi is growing. Her appointment was announced at the Dec. 9 Planning Commission meeting. The position of City Planner is turning out to be a perfect fit for both Kim and the Tehachapi Development Services Department headed by Director Jay Schlosser.

The Burnells moved to Tehachapi on Dec. 1 along with their Weimaraners, spanning four generations of dogs. Their two horses will be joining them soon. Beyond their interest in animals, both of them are foodies. Kim has a food blog and Barry, who is now retired, makes his own wine. He belongs to a wine-making group that buys their grapes from Chalk Hill near Sonoma. Yep, the Burnells will fit right in.

The Tehachapi Planning Commission meets the second Monday of the month at 6 p.m. in the Wells Education Center, 300 S. Robinson St., Tehachapi.