The Special Consensus brings 'Bluegrass with an attitude,' Jan. 26 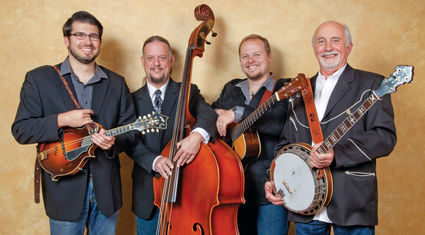 Among the blueblood bands of bluegrass music, Bill Monroe and the Bluegrass Boys, of course, will always be the king but the four-piece band, The Special Consensus, is certainly one of the crown princes. Tehachapi will be treated to a third royal visit by this Nashville-based band on Sunday, Jan. 26 at 3 p.m. at the BeeKay Theatre in Downtown Tehachapi.

The award-winning, GRAMMY-nominated group was formed in the Chicago area in 1975, and features a repertoire of traditional bluegrass standards, as well as original compositions and songs from other musical genres performed in the bluegrass format. The band has released 19 recordings and appeared on numerous National Public Radio programs, as well as TV shows such as The Nashville Network and the Grand Ole Opry.

International tours have taken Special Consensus to Australia, Canada, Europe, South America, Ireland and the United Kingdom. They have even appeared in concert with many symphony orchestras nationwide. Through their Traditional American Music Program (TAM), they bring an awareness of our musical heritage to schools, both nationally and internationally.

Although the personnel line-up of The Special Consensus has changed over the years, the present four members are all bluegrass stars in their own right. Chicago born and bred Greg Cahill is a co-founder of the band and has been playing bluegrass banjo since the early 1970s. He has appeared on all 17 of The Special Consensus recordings, on numerous recordings by other artists and on many national television and radio commercials. Cahill teaches banjo at festival workshops and at music camps and colleges nationally and internationally and has released instructional DVDs and books. He served on the Nashville-based International Bluegrass Music Association (IBMA) Board of Directors from 1998-2010 and was awarded the prestigious IBMA Distinguished Achievement Award in 2011.

Rick Faris is known in the world of bluegrass music as an award-winning guitar player. Born and raised in the Midwest, Rick started playing with his family's bluegrass band in 1998. The Faris Family band toured extensively throughout the USA and Canada and was awarded numerous honors by the Society for the Preservation of Bluegrass Music in America (SPBGMA). Rick was awarded the SPBGMA Midwest Guitar Performer of the Year in 2005 and 2008. An accomplished luthier, Rick plays a guitar he built himself.

Bassist Dan Eubanks grew up in Missouri and attended bluegrass festivals with his grandparents from a very young age. As a young boy, he started playing music on drums, then added banjo and guitar, and eventually bass. Dan played in country and rock bands throughout high school and attended college on a music scholarship. He holds a Master's Degree in Jazz Studies from Webster University in St. Louis. In 2003, after many years of teaching at several St. Louis-area colleges and universities, Dan moved to Nashville to get back to his bluegrass roots. He joined the Special Consensus in 2013.

The newest member of the band is mandolin player Nick Dumas, who joined in 2015. He grew up in Brier, Washington, and was introduced to bluegrass music at a very young age by his dobro-playing grandfather who had a country gospel band. Nick learned the violin in his school orchestra and soon was playing fiddle in his family band. He has added mandolin, guitar and banjo to his skills, and was a highly respected member of several popular bluegrass bands in the Seattle region.

The consensus among bluegrass aficionados is that The Special Consensus is a royal visit not to be missed.

For video samples of The Special Consensus visit www. specialc.com or http://www.fiddlerscrossing.com.

The BeeKay Theatre is located at 110 S. Green St. in Downtown Tehachapi. Tickets may be purchased at Tehachapi Treasure Trove, Tehachapi Furniture in Old Town, Lucky's Barbershop, Fiddlers Crossing at Wednesday night Open Mic night or online at http://www.fiddlerscrossing.com. Tickets to the concert are $25. The concert begins at 3 p.m. Doors open at 2:30 p.m.

On the horizon: Beppe Gambetta, The String Revolution and Grant Maloy Smith.