Aviation enthusiasts everywhere know there are some very important dates to remember in the month of December.

At 10:35 a.m., on December 17, 1903, Orville Wright made history by flying a powered machine into full flight at Kitty Hawk, N.C. This year marks the 106th anniversary of that famous flight.

During the 1890s, sometimes known as the decade of the bicycle, the Wright brothers developed a successful business of bicycle repair. They happened onto an article in a magazine about Otto Lilienthal and his studies of the parabolic curve of a bird's wing and flight. The spark of flying was ignited and they experimented with kites and gliders for many years before their historic manned powered flight in 1903.

The other important aviation dates in this month are: December 14-23, 1986, when Voyager made the extraordinary milestone, first-ever non-stop, unrefueled flight around the world with pilots Dick Rutan and Jeana Yeager in nine days, three minutes and 44 seconds. This year marks the 23rd anniversary of the flight of Voyager.

Numerous test flights, plus a flight to Oshkosh, Wis., to attend the annual Experimental Aircraft Association's fly-in led Dick and Jeana to the edge of entry into aviation history forever.

Burt Rutan, genius aerospace engineer/designer, created Voyager for maximum fuel efficiency. Dick Rutan, Mike Melvill, Crew Chief Bruce Evans and a host of volunteers built and conducted test flights on this graceful design at Mojave Airport over a period of five years. Mike Melvill was the only other pilot to actually fly Voyager.

I have had the pleasure of hearing the poignant Voyager story told by Dick and Burt Rutan on many occasions and each time I hear something new. Dick likes to remind people, "If you can dream it, you can do it!"

The cramped cockpit environment was most uncomfortable and sleep deprivation was the enemy. Imagine being locked in a phone booth for nine days while flying at speeds of only 80 knots navigating around thunder storms, near hostile countries threatening to shoot you down, worrying about whether or not you have enough fuel for the trip, running on one engine to conserve fuel and on the last leg of the flight suffering rear engine failure due to an air pocket in a fuel line, losing 5,000 feet of altitude while attempting to start the front engine, seeing the ocean coming up to meet you and then the front engine catching and roaring to life, which saves yours! Talk about anxiety!

We were there with thousands of other people to witness the landing of Voyager on Dec. 23, 1986. The Voyager story is one of great emotion, courage, vision and adventure.

Thirteen years ago, Voyager Volunteers came together in Mojave to celebrate the 20th anniversary of the historic flight. Glenn Dunlap of Cincinnati, Ohio constructed a one-quarter scale radio controlled model of Voyager and brought it to Mojave to fly off the same runway as the original Voyager. Dick Rutan stood on the ground and watched as Voyager lifted into the air and said, "That's the first time I ever saw her fly!" 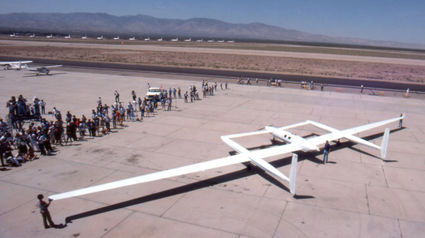 Voyager aircraft on ramp at Mojave Airport before historic flight from Edwards AFB.

The model hangs in the SpaceShipOne enclosure in Legacy Park at Mojave Air & Space Port. Plaques are in front of the enclosure describing the model and SS1 replica.

Congratulations to Dick Rutan and Kelly Hall on the release of the new book "The Next Five Minutes – Embracing the Impossible." Come to Plane Crazy Saturday 10 a.m. to 2 p.m. at Mojave Air & Space Port on Dec. 21 to buy your personally autographed copy. Be sure to make a reservation at [email protected] because we have very limited seating for Dick's talk. You can order a copy at http://www.dickrutan.com, too.