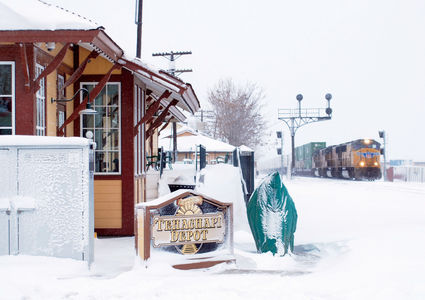 Our recent snow storm was unusual for several reasons: we seldom have a White Thanksgiving, so that in itself was remarkable, and three days of snow in a row is also a rare occurrence these days. But is it typical of Tehachapi winters? I'm glad you asked. . .

Technically, December is more of an autumn month than a winter month, at least according to the calendar – winter doesn't officially start until December 21, meaning that December has 20 autumn days and only 11 winter days in it. In the Tehachapi Mountains, however, a good snowfall will convince you that the last month of the year is solidly in the winter category.

The fact that our first snowstorm of the year was in November, which is about a once-in-a-decade event under our current climate conditions, makes it feel like winter has already arrived. Our typical Thanksgiving weather is temperatures in the 50s, not the low 30s. Occasionally Tehachapi people gather for the annual turkey feast under sunny skies in the low 60s, which is totally a Southern California move.

So it has happened before and will no doubt happen again, but if someone asks "How much snow do you usually get in Tehachapi in November?" the correct answer is "Not enough to bury a dime."

The best contribution of a snowfall, of course, is that it is a slow-release form of water delivery. Last week's snowstorm was followed by ideal conditions for keeping the water – the temperature rose just enough to melt snow slowly, allowing liquid water to seep into the soil, but it was neither sunny or windy, both of which increase evaporation into the air. So our Thanksgiving snowstorm provided the maximum water benefit.

The two most noticeable immediate effects of a Tehachapi snowstorm on humans are these: the closing of Highway 58, and the cancellation of Tehachapi schools. The school closures gladden the hearts of most Tehachapi kids, but closing Highway 58 can be very disruptive. Local residents can't leave or can't get home if they happen to be out of town when the road is closed. Travelers are also inconvenienced, for Highway 58 through Tehachapi Pass is a major east-west corridor in this part of the state.

The California Highway Patrol used to very rarely close the freeway back in past decades, but they would require cars and pickup trucks to have snow chains on their tires. Dave Cord, whose father owned Cord Chevron out on Mill Street, by where the Home Depot sign is now, told me that they used to buy 500 sets of snow chains each year, and every year they would sell out of them. Collins Chevron, about where the Tehachapi Visitors Center is now, also used to sell hundreds of sets of snow chains.

I ran into Tim McLaughlin after our recent snowstorm and he told me he used to work at both of these now-vanished gas stations and he put on many a set of snow chains. The employees even put them on the patrol vehicles for CHP officers, who would tip them. Tim also told me that he and the other teens who pumped gas (there was no self-serve gas back then) had a verbal agreement with the CHP officers: if the gas pump automatically shut off on an even amount with zero cents, like $10.00 or $14.00 or whatever, the officer would buy sodas for the kids working at the station that shift. Ah, those more relaxed earlier days. . . .

The problem with leaving the freeway open, however, is accidents would occur that would then snarl up traffic for hours. The most common and problematic were accidents involving big rigs, which would jackknife across both lanes, preventing any movement. And there they would stay, until a big rig towing company could send a truck from the Bakersfield area. It could be a major inconvenience if you were unlucky enough to have left the summit and were somewhere between Tehachapi and Keene. You couldn't turn off, you couldn't turn around, you were just stuck there.

Now the CHP and Caltrans have a much wiser protocol. When snow is predicted, snow removal equipment is prepped and ready – snow plows and trucks to spread sand or cinders (crushed volcanic basalt from the Owens Valley). If snow begins to obscure the roadway, CHP officers halt through traffic, then start closing onramps, while allowing drivers to exit on offramps or continue if they're already past the snow, so no motorists are stranded. When the freeway is cleared it is closed, allowing snow removal crews to work without having to worry about the motoring public.

When the snow eventually stops and the roads are not snowy or icy, the highway is reopened. And although people are definitely inconvenienced by the closure, they are not injured or worse, and their cars haven't been damaged in an accident, and they have not been trapped in the snow in their cars.

It's too early to know what this coming winter will bring, but I think I speak for most Tehachapi residents when I say "Keep the moisture coming!" At least some of it in the form of snow, beautiful snow. . . . 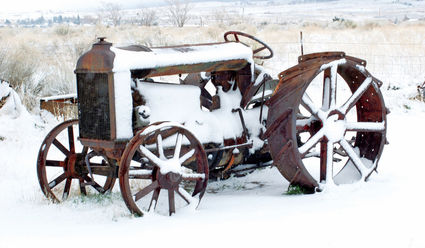 A 1921 Fordson tractor coated by a Tehachapi snowstorm that came in from the west.