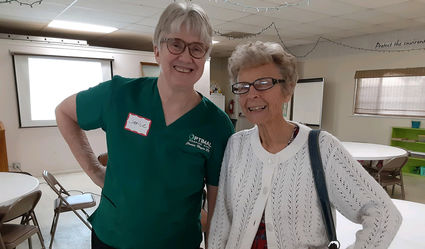 Members of the American Association of University Women learned about cemeteries and graveyards when Barbara Wood and Janice Armstrong spoke at the November monthly meeting. It was a dozen years ago that they started an AAUW interest group, which they called The Cemetery Club. Since then they have learned more than they ever envisioned.

They explained there are at least 10 cemeteries in Tehachapi and more may be discovered. Most people in Tehachapi are familiar with the East Side Cemetery and the Westside Cemetery, which is known as the Catholic Cemetery. Both are owned by Kern County and are supported through property taxes. The group has discovered and explored various other burial grounds.

Armstrong showed pictures of many of the cemeteries the group has visited. She explained the history that such visits have revealed. When asked the difference between a cemetery and a graveyard, she said a cemetery is a burial ground, but graveyards are associated with a church. The main difference is their location. Graveyards are older than cemeteries since cemeteries are a relatively new concept.

People interested in history and members of other historical societies have joined the AAUW group. Exploration and visits have been extended beyond Tehachapi. It is a mixed group of people and they share their knowledge with one another.

Armstrong related several interesting stories about ghosts and other legends. She told about the group discovering an abandoned cemetery and notifying the owner who was unaware of it. That cemetery is now restored and maintained.

Armstrong explained the Cemetery Club is an AAUW interest because it promotes the goal of life-long learning and friendship. She invited the audience to join the group's next excursion to a cemetery in Bakersfield.

AAUW advances equity for women and girls through advocacy, education and research. Men or women, with a two-year or higher degree, are eligible to join. Call (661) 972-6508 for further information.