Traces of Tehachapi history remain in the artifacts left behind 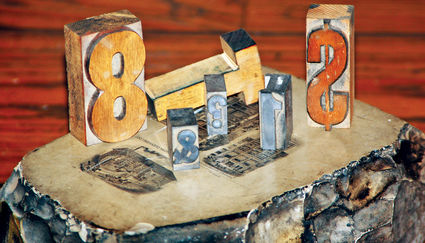 This old wooden type and metal linotype symbols came from the Tehachapi News, and they are sitting on a old lithograph stone, another early printing method.

Ever since I was a little kid, I've been interested in old objects and artifacts from earlier eras, especially if they were used in the Tehachapi Mountains. These are tangible remnants of our history, and though the people who once used them are gone and the places have changed, these humble items have traveled through time and are physical reminders of the past.

I joined the Tehachapi Heritage League when I was 11 years old, when the museum was housed in the little old Chamber of Commerce building at Railroad Park. The fire station in Tehachapi was then located where City Hall is today, and that's where the key to the museum was kept.

As a 12-year-old, I worked as a docent and would occasionally open the museum by myself, checking out the key from the fire station and walking over to open the museum to visitors. I found history and antique objects genuinely fascinating.

I came along about 100 years too late to see huge numbers of Chinese laborers painstakingly building the railroad through Tehachapi Pass, but I can hold the lid to an old copper box with Chinese characters on it that came to America on a sailing ship, and was used by some of those long-vanished workers, and feel a little connection. Or handle one of my great Uncle Lance's harmonicas that he used to play at Tehachapi gatherings in the 1920s, and conjure up images of those hard-working people who paused to socialize and listen to some live music on a warm summer evening.

I had the good fortune to grow up on my family's little old Tehachapi farm, where many of these artifacts sat through the years. Time swirled past in the outside world, but seemed to move slower in this place of old shops and outbuildings. It was like one big attic where you could rummage around among the past.

For me the allure of these items is in the past lives that they represent. We have gotten better at preventing the loss of endangered species of plants and animals, but human culture is far more fleeting and imperiled. Dramatic and continual change is so much a part of our existence that each generation now lives differently than the previous generation. If you live long enough, the world of your senior years will be markedly different from the world of your youth. 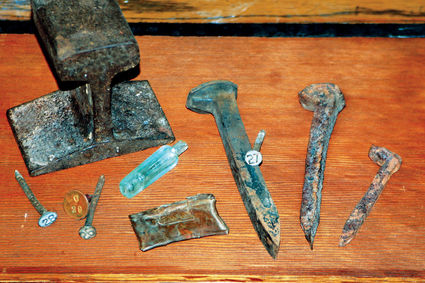 Some old items associated with the railroad: the cross-section of rail was used as a little anvil, while the little glass bottle and metal lid with Chinese characters was used by the laborers who built the railroad through here in the 1870s. The railroad spike at the left came from the SP railroad, the one in the middle came from the old line that carried ore from the quarry to the plant at Monolith, and the little one at the right came from an area mine. The date nails were used by the railroad to keep track of how various wood preservative treatments were lasting.

So I hang on to the objects on this page as interesting reminders of how life used to be in the Tehachapi Mountains. Much has changed, and will continue to change. I enjoy being around items that were used by the men and women who once lived here and have now passed on.

History wasn't just written in the halls of Congress – that kind doesn't even interest me much – it was also written on the farms and ranches and in the small towns of America, in the lives of the people who lived here. You can connect with the past and see some great examples of Tehachapi artifacts at the Tehachapi Museum and the Errea House Museum on South Green Street, and at the Tehachapi Depot Museum on Tehachapi Boulevard.