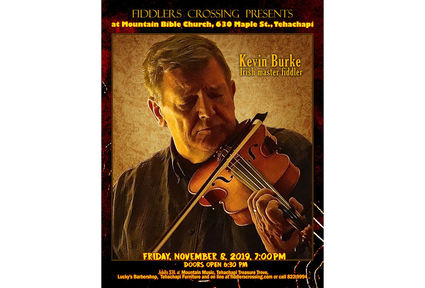 When the concert's engineer, Peter Cutler, asked Burke's agent what kind of back-up musicians would be playing with him, he was told:

"When you're Kevin Burke, you don't need any back-up!"

The concert will be comprised of one man with a fiddle, alone on the stage, completely filling the air with some of the best Irish fiddle playing you're likely to hear in your lifetime. Kevin Burke's sparkling, highly ornamented and lyrical Sligo-style of Irish fiddle has earned him a reputation as one of the finest, most influential players in traditional music today.

Burke grew up in London and studied classical violin from the age of eight. He spent much of his youth in the local Irish pubs with his parents, listening to rural musicians play traditional music. His violin teacher encouraged him to explore all genres of music. On frequent visits to relatives in Ireland, he immersed himself in the Sligo fiddling style. By the age of 13, he was playing in local Irish groups. He eventually played in a duo with Christie Moore of Planxty, and in 1976, joined the internationally renowned Bothy Band.

A chance meeting with Arlo Guthrie in a County Clare pub led him to come to America and play on Guthrie's album, "Last of the Brooklyn Cowboys."

Thirty years ago, Burke visited Portland, Oregon, on the advice of Hoyt Axton. He has lived there ever since. In 2002, he was awarded a National Heritage Fellowship from the National Endowment for the Arts, the highest honor given in the United States for folk and traditional arts.

While acknowledging that his playing is based on Sligo style, combined with the driving rhythm of Donegal fiddling and the lyricism of County Clare, he also says he has been influenced by many musical genres outside of Irish traditional music.

But his style is all his own – for example, at the concert, listen to the strong backbeat he gives with an upbow, instead of the usual downbow, to every third eighth-note in many of his reels, or how he emphasizes the strong beat by digging in on adjacent open strings.

Clearly, Kevin Burke doesn't need any other instrument to back him up!

Mountain Bible church is located at 630 Maple St., in Tehachapi.

Tickets may be purchased at Mountain Music, Tehachapi Treasure Trove, Tehachapi Furniture in Old Town, at Fiddlers Crossing during the Wednesday Open Mic nights, and Lucky's Barbershop, or online at http://www.fiddlerscrossing.com. For reservations, call (661) 823-9994. Tickets to the concert are $30. The concert begins at 7 p.m. Doors open at 6:30 p.m. sharp.

On the horizon: Missy Andersen, "A Christmas Carol" read by Alex Zonn and Winterdance at the BeeKay Theatre.