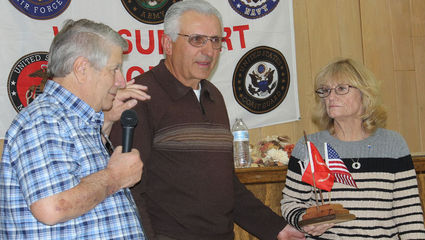 This year's Fifth Annual Pancreatic Cancer Fundraiser sponsored by the Major Jason E. George VFW Post 12114, initiated by Pat and Alex Athans on behalf of their daughter, Christina, was a great success. Total funds raised this year was $15,307, coming from donations, the silent auction, which was comprised of over 50 items, and 50/50 tickets sold at the dinner. In the last five years the Major Jason E. George VFW 12114 has donated 100 percent of all proceeds of the fundraisers to the Pancreatic Cancer Action Network (PanCan). These donations have amounted to $50,356. PanCan has marveled at what an amazingly charitable town Tehachapi is.

The American Legion Auxiliary prepared a delicious spaghetti dinner, as they have for the past four years, which was served by volunteer students from Heritage Oak School. A Tehachapi High School student also very generously donated his time to sell 50/50 tickets.

During the evening, the VFW presented to Rick and Donna Zanutto a special handmade flag stand, complete with a U.S. flag, U.S. Marine Corps. flag, and a dove with the name of their fallen son, Adam Zanutto, written on it. Zanutto was a Marine who gave all for our Country in the Middle East armed conflicts. The dove came from the 2018 Christmas Candlelight Ceremony at Forest Lawn Cemetery in Glendale where Christina is interred.