An interview with Gianni Carpani – An elite duathlete in Tehachapi 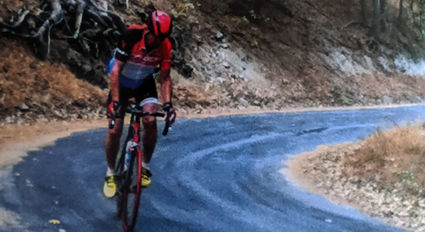 Gianni Carpani may be among Tehachapi's rather large group of "mature" citizens, but he remains one of our town's most celebrated athletes with decades of impressive accomplishments as both a runner and a cyclist. The youngest of four brothers, Gianni was born in Italy in the late 1940s. Like most European males, as a child and young man he enjoyed playing soccer and later also took up cycling. He participated in cycling competitions in Italy, exhibiting a natural ability for the sport; however, as a youngster, he failed to reach his potential as a cyclist because he neglected his training-a fact he attributed to his youth and immaturity: "When you're young," he readily concedes, "you're stupid!"

In the late 1960s, Gianni completed 18 months of military training in Italy and then went to work at a hospital as an assistant pathologist. About his time at the hospital, Gianni had what he described as a "very strange story" to tell: While working there, he began suddenly to pack on an alarming amount of weight–"too much good food and wine in Italy!" The doctor for whom he worked became concerned and suggested Gianni do what he could to drop some pounds. In response, he began a serious jogging regimen, and within eight to ten months had worked himself into superior physical shape. By the late 1970s, he began to compete as a runner in cross-country races, and, despite his ongoing aversion to serious training, managed to impress with his natural ability. He took part in 5Ks, 10Ks, and marathons, often placing in the top echelon and even winning some of his races.

Smitten by love, Gianni emigrated to California in 1982: "I met an American girl. I dropped everything to come to the U.S. to be with her. This was not my smartest decision." Indeed, while he and the young lady married, the marriage did not last. Despite the failed marriage, Gianni lived in the Los Angeles area (Culver City) for 14 years, doing maintenance work for the City. While in Culver City, he continued to complete successfully in marathons, winning his age group on many occasions. Yet it was during this period of his life that he felt the need to embrace a new challenge, so he took up cycling again, and this time as a serious activity. At first, he thought of combining running, cycling and swimming and becoming a triathlete; but he soon discovered he was a poor swimmer, so he began to compete as a duathlete (running and cycling). Once again, he enjoyed singular successes, among them the following:

In the mid-1990s, Gianni moved to Tehachapi, and in 2003 married Bonnie. Bonnie is well known (and well liked) by most all Tehachapians, having worked at the Tehachapi Post Office for years. Gianni continued to compete with success as a duathlete, and in 1997 garnered a sponsorship with an outfit called SBR Sports. The sponsorship lasted for a couple of years and helped to defray some of his expenses, including food and lodging.

Now in his early 70s, Gianni continues to participate at a superior level in both running and cycling. His current training regimen includes lifting weights and cycling up to 200 miles per week. Indeed, decades of competing successfully as an elite athlete have taught him that "to accomplish anything [at a high level] you need to put a lot of time into it."

At this point in his life, Gianni would like to give back to our community by helping to mentor a highly-motivated young person in cycling. "If you want to accomplish anything in this sport [cycling]," he insists, "you need to start young, no later than 17 or 18 years of age. The body needs time to build muscle and endurance." However, his decades of experience also inform him that, with two or three years hard work, "you could be ready to do big things." Any youngster interested in a potential mentorship with Gianni can reach him through The Loop newspaper.