On Oct. 19 at Mojave Air & Spaceport, the Mojave Transportation Museum will feature a special Plane Crazy Saturday by celebrating the 40th anniversary of the first flight of the production model of the Rutan Long EZ aircraft. We are keeping our Plane Crazy event consistent on the third Saturday of the month, but the "first flight" was really on Oct. 12.

Dick and Burt Rutan did some digging to find logbook entries of the first flight. Burt said, "The basic production LongEZ N79RA, with the 23-degree wing sweep, flew first on October 12, 1979. Thus, the 40th anniversary of the LongEZ is 12 October, 2019."

"After some testing and tweaks it was ready to release for homebuilder plans on Nov. 26, 1979," Burt added.

In June 2003, there was a Rutan Long EZ fly-in that filled the flightline with canards!

Dick Rutan and Mike Melvill built their Long-EZ's side by side and both planes will be at Plane Crazy Saturday.

Dick painted his EZ light sky blue and it was dubbed "Ole Blue."

Burt Rutan created Rutan Aircraft Factory to market a commercial variation of his Model "VariViggen" prototype that he began building in his garage in 1968 which he called The Model 32, also known as the VariViggen SP. The SP model utilized a slightly longer fuselage, larger span and winglets in order to increase efficiency. The Rutan Aircraft Factory sold over 600 plan sets for the VariViggen to homebuilders, and eventually about 20 of the aircraft were built.

Two of Burt Rutan's first employees at the Rutan Aircraft Factory (RAF) were Mike and Sally Melvill who decades ago bought a set of Rutan's VariViggen plans out of the back of Burt's car at the Oshkosh airshow for $51. They built the plane, flew it to Mojave from Indiana, and both were hired that day. The Melvills worked for Rutan for 29 years before retiring from Scaled Composites in 2007.

We are hoping that a Vari-Viggen will fly in from Arizona to help celebrate the 40th Anniversary of the First Long EZ Flight.

The Rutan Model 202 Boomerang is a high performance pressurized five-place light twin experimental aircraft. It was designed and built by Burt Rutan to increase performance, efficiency and safety compared to other general aviation aircraft available. The Boomerang is Burt's solution to a high performance multi-engine aircraft that would not become dangerously difficult to control in the event of a engine failure.

The Boomerang first flew in 1996 and was used by Burt for personal transportation. Currently, the Boomerang is being maintained and operated by Tres Clements.

Tres is co-founder of San Luis Engineering Services, LLC, which provides efficient engineering and manufacturing services to support the development of high-performance aerodynamic and mechanical systems. (Tres was formerly with Scaled Composites as a manufacturing/design engineer.)

Catbird will be on display!

The RAF/Scaled Model 81 Catbird was a proof-of-concept light plane. This very sleek little five-place tractor airplane was powered by a single 210 horsepower turbocharged four-cylinder Lycoming TIO-360 with a two-bladed Hartzell constant speed prop on the front end with the pilot sitting up front on the centerline. The next row of passengers sat on either side of the pilot but aft about 15", the 4th and 5th passengers sat back-to-back with numbers 2 and 3, facing aft. The airplane had a very low drag, low wing with a forward swept "T" tail and a small canard near the firewall.

In 2011, Zach Reeder worked at restoring this aircraft that hung upside down in the Scaled Composites hangar. He led the project of getting Catbird back into the air. In 2014, he flew Catbird to set a 5,000km closed course speed record of 211 mph in 16 hours. The record attempt required him to design and construct extensive modifications to the plane.

Starship flying in for celebration!

In the early 1980s, Burt Rutan was the world's acknowledged expert in tandem wing, all-composite pusher aircraft. He was approached by Beechcraft to build a 62 percent scale proof-of-concept (POC) prototype aircraft to flight test the configuration, while they began a preliminary design of full-size prototypes. Burt's POC was completed in record time and made its first flight in August, 1983. 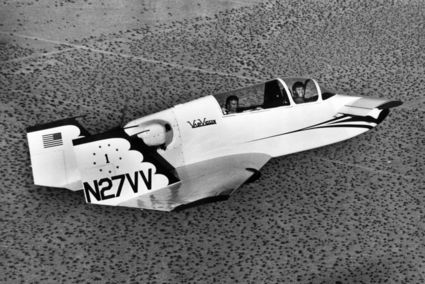 An unexpected visitor flew into Mojave Airport on Wednesday, July 9, 2003. Rob Scherer, owner/pilot of Serial Number 51 Starship I taxied his aircraft to Scaled Composites, shut down the engines, walked around to the front office of Scaled and said, "I understand that Burt Rutan has never had a ride in a production model Starship and if he is interested, I have one sitting out on the ramp."

That meeting and flight created a lasting friendship and Burt then asked Rob if he would fly chase on all of the SpaceShipOne launches.

Rutan designs galore, with Burt and Dick Rutan speaking, along with Mike Melvill, America's First Commercial Astronaut in the Mojave Air & Spaceport's Event Center begins at 11 a.m. Tickets are $30 for the presentation and luncheon. Go to http://www.mojavemuseum.org for more information. Tickets at http://www.mojavemuseum.org/store/40th-Anniversary-of-Long-EZ-p151309137. Don't miss it!

See you on our next fight!