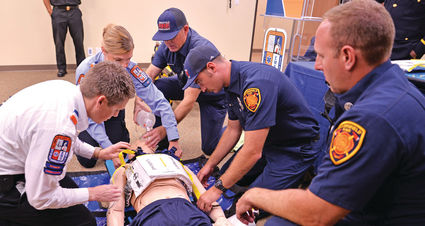 Hall Ambulance Service, Inc. announced details this week of its massive implementation of the ZOLL AutoPulse making it the largest deployment in North America. The device will give the Company's Paramedics, EMTs, and Critical Care RNs, the upper hand in responding to sudden cardiac arrest.

Eighty AutoPulse units have been placed into service on each Hall Advanced Life Support (ALS) and Basic Life Support (BLS) ambulance in its 9-1-1 response area, which covers 88% of Kern County's population (over 800,000 people). The device will also be carried on-board Hall Critical Care Transport's ground unit.

The ZOLL AutoPulse Resuscitation System helps to improve blood flow to the heart and brain during SCA because of the unique, high-quality chest compression it generates compared to manual CPR. Compared with manual CPR, the AutoPulse has been shown to reduce interruptions in compressions during transport by more than 85% and was applied in as little as 14 seconds. "Historically, when we do CPR, our hands are allowed to push about 30% of blood flow to the brain in an ideal situation," said Bryan Pank, Senior EMS Account Executive with ZOLL Medical Corporation. "With the AutoPulse deployed, using the LifeBand, you're going to be able to push near-normal blood flow very quickly. It's consistent, and it's constant!"

Over 600 EMS workers and first responders including Hall Ambulance Paramedics, EMTs, and Critical Care RNs; as well as, firefighters from the Kern County Fire Department and Bakersfield Fire Department took part in one of the 67 comprehensive training sessions which took place over 10 days in July. "We wanted to bring in the fire departments so that we are a cohesive team as we work together on scene of a cardiac arrest patient," said Chris Leone, manager of Hall Critical Care Transport.

The relationship between Hall Ambulance and the fire departments is very amicable, which ultimately results in greater patient care. "I can tell you that we're pretty lucky in Kern County. When you go nationwide you won't find many locations where a private ambulance company and the city or the county [fire departments] work together," said John Surface, chief operating officer of Hall Ambulance. "We started this high-quality CPR project three years ago. Our original partner was the Bakersfield Fire Department. We've done joint training now three times-starting in 2018, in May of this year, and now with the AutoPulse, we've just done it again. We had the County join us this time so that everybody throughout Kern County in the areas that Hall Ambulance serves can be trained."

The local fire departments were equally excited to get on board with the training of high-performance CPR and now with the AutoPulse. "As the Bakersfield City Fire Chief, I find it absolutely critical that we can train anytime with Kern County Fire Department and at any time with Hall Ambulance," said Chief Anthony Galagaza. "It's so important that we come together collectively when it is something lifesaving such as the AutoPulse. To have that continuous high-performance CPR and this joint training is critical for the simple fact that this is just better for the citizens of Bakersfield and the citizens of Kern County."

Kern County Fire Department Chief David Witt echoed the sentiment by saying, "It's a great opportunity to be a part of assisting with technology – technology for the future, technology for the people within Bakersfield city and as far out as Boron or Lost Hills."

Sudden cardiac arrest is a substantial health problem killing approximately 350,000 persons each year in the U.S. and Canada alone, and as many as a million worldwide. It is the leading cause of unexpected death in the world and strikes without warning. Survival is poor in most communities at less than 10 percent, and improvements in resuscitation practices could save as many as half of these victims.

Through the years, Hall Ambulance has incorporated several ZOLL products which has supported the Company in its goal to provide exemplary patient care. "Today marks the completion of three implementations started by our founder, my husband," said Lavonne C. Hall, president and CEO of Hall Ambulance. "This includes the ZOLL X Series Cardiac Monitors, Road Safety, and now the AutoPulse."

Participating in the news conference was Kurt Sandstrom, Group V.P. of North American Sales for ZOLL Medical Corporation. On entering the foyer of the Harvey L. Hall EMS Academy, he noticed the Founder's Era Timeline highlighting 47 years of Hall Ambulance milestones which includes several ZOLL products. "As I walked into the building, it was not lost on me, looking at the photos of the company and the long history and partnership between Hall and ZOLL. We've enjoyed the spirit of collaboration, and I would like to thank you all with deploying the largest amount of AutoPulse in North America."