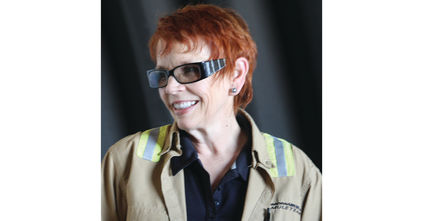 Mary Beth Garrison, external affairs and communications manager for Rio Tinto, said that the great borate mine will soon be known for lithium production.

Speaking at the July 11 meeting of the East Kern Economic Alliance (EKEA) at the Rio Tinto visitor center in Boron, Garrison said that a new industrial process makes it possible to extract the valuable element from the waste piles (gangue piles) left over from mining borates.

"There are 90 years of waste that we can re-process," she said. "Lithium is critical for batteries and electric vehicles."

She said that Rio Tinto, a global mining company that extracts diamonds, copper, borates and other elements and minerals from the earth, has developed a lithium mine in Serbia.

Garrison said that when the recent earthquakes struck, "our team acted quickly. They did seismic testing of the slopes. Engineering looked at all the buildings. They shut down the furnaces and shut down the operations Friday night."

She said the company has reached out to Searles Valley, where chemical mining takes place in an ancient lakebed.

In other Alliance business, Alexia Svedja reported that California City will be opening a co-workspace. She said restaurant sales have increased 44 percent in a year and that hotel occupancy is up 60 percent since last year and 55 percent in five years. The number of people with post-graduate degrees has doubled, to 234.

The community of Boron is refurbishing vintage signs, and community cleanup days were continuing for three weeks.

Rosamond is pleased about the news that it soon may have a bank. Lisa Checkley of the Rosamond Municipal Advisory Council said that an unused waste treatment plant will be activated to provide 1,000 acre feet of water for recharge.

Tanya Martinez, senior manager, Solar Development for project developer sPower, gave a presentation on the 1,854-acre Raceway Solar Project. The 1.5-gigawatt installation is in the permitting process and environmental review. The development on multiple parcels is in Kern County south of Rosamond Blvd., between Astoria Ave. and Ave. A, and between 60th St. West and 90th St. West. Martinez said construction should begin in 2021. Neighbors who live close to the proposed solar arrays have joined to oppose the project.

"She's been working ceaselessly to get back to normal. There was $450 million in damage," Peters said.

Kern Valley has a new internet provider, Lake Links. Seniors and low income customers receive a break on their bills.