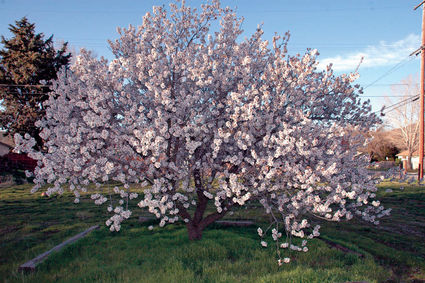 An almond tree on D Street in full flower after warm days in March.

What kind of weather can you expect in Tehachapi during each month? Here's a first look

In the last issue of The Loop, I mentioned that I would give a little month-by-month look at weather in the Tehachapi Mountains. So this is the first installment of that monthly summary. Our weather is varied and over the years has often defied accurate prediction, but here's what you can reasonably expect from the first four months of the year. Bear in mind that Tehachapi weather is not always reasonable.

The start of each calendar year, January tends to be our coldest, snowiest month. The highest monthly snowfall ever recorded for Tehachapi was in January of 1933, when 44 inches of snow fell. Nearly four feet of snow in a single month has not been seen before or since, but 32 inches of snow was also recorded in January – in 1930. The coldest official temperature marked on Tehachapi thermometers is -4 degrees Fahrenheit, which has been reached on several different occasions, including January of 1932.

However, since we are still in Southern California (not by much, but still) January can also bring warm temperatures in the 70s, including January highs of 74 in 1971, 73 in 1964 and 1962, and 72 in January of 1945 and 1969. Unseasonably warm weather like this is confusing for plants, and there have been years when almond trees – always the earliest to flower – were in full bloom by the end of January. Of course fruit from any trees that bloom this early is doomed by later killing frosts.

So January in general tends to be cold and occasionally snowy, but we sometimes experience high pressure systems that bring dry, warm weather to our mountains.

The shortest month of the year also brings cold weather, of course. In fact, this past February was the least warm February in Southern California ever – in downtown Los Angeles, weather records date back to 1877, and February of 2019 was the first time ever that the thermometer never reached into the 70s a single time. In Tehachapi, we barely got into the 50s in the entire month of February. Temperatures down in the single digits have posted before, the most recent time in February of 2007, when the mercury dropped to 8 degrees. At the other end of the spectrum, there have been highs of 78 degrees recorded in February of 1965, 1954 and 1951, and 76 degrees in February of 1986 and 1977.

February in general is reliably cold in the Tehachapi Mountains, typically with highs only in the 50s and lows in the 30s. As noted, though, surprisingly warm or bitingly cold weather can happen any month of the year here.

In March, the month that sees spring officially begin, weather can be all over the map. For example, one of the coldest temperatures for the month was set in the year 2000, when the low was only 13 degrees. Yet in 2004, a high of 80 degrees was tallied in March. I have described our local weather like this: "Tehachapi, where it's not unusual to both sweat and shiver on the same day." This can be true during any month, but the spring months are especially fickle.

March is the height of spring down in the San Joaquin Valley, at elevations of about 500 feet, but in Tehachapi most wildflowers are still growing rather than flowering. But March is the month when outdoor activities start to beckon more strongly, and make sense even to those who don't like cold weather.

April is the month when spring truly and persistently arrives at higher elevations. Flowers are blooming, birds are nesting, baby animals start to be seen, the grass is green and inviting. T-shirts and shorts are often suitable attire. April highs of 89 degrees were recorded in 1981, 1959 and 1950, and highs of 88 in 1954 and 1929. There are often sweet, warm days that you wish would last forever. . .but don't put away the coats and long johns, yet! April is probably the most variable month of all. Killing frosts, which occur when the temperature drops to 28 degrees for two hours or more, are always a threat to local orchards that are blooming or even have tiny fruit forming on the trees. April record lows include 17 degrees in 1975 and 1965, 19 degrees in 1999 and 20 degrees in 1933 and 1927.

While April can bring rain storms, and occasionally even snow, this is typically the last month to provide rain. The old weather rhyme "April showers bring May flowers" is an East Coast or Midwest thing, and is not really valid in Southern California. We welcome April showers, of course, but it usually only rains a few times in April, and the storms are typically smaller. Once in a while it evens snows in April, though it only lasts a few hours, if that long. 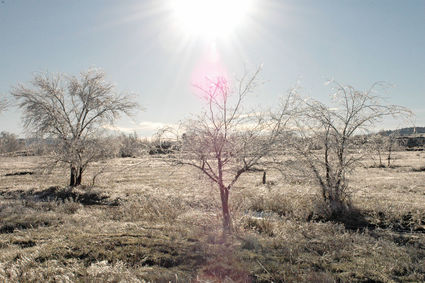 A weather phenomena called pogonip coats exposed surfaces like these trees with a layer of ice. Here the early morning sun shines on pogonip in January.

April is one of the windiest months, which increases revenue for wind energy producers, but is not the most desirable for fancy outside dinners. And yet other April days are calm or only have the gentlest of breezes. Tehachapi is known as the Land of Four Seasons (hence my column title!), and April in Tehachapi could be known as the Month of Four Seasons.

Your best chance to experience all the different weather that Tehachapi produces in a single month is April.