Donuts make the world go round 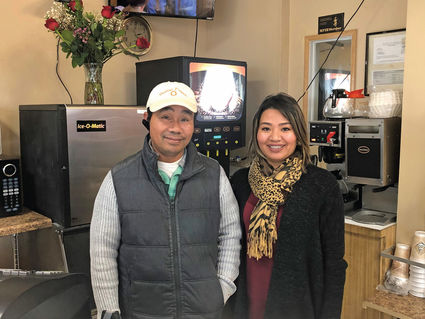 It is said that, "it's not work when it is a labor of love." A perfect illustration of that old saying applies to the new owner of Tea Donuts, located next to Rite Aid at the corner of Tehachapi Blvd. and Tucker Rd. Chantha Sokny Lay comes from Bakersfield donut royalty. Her family has owned Foster's Donuts on Chester and Columbus for 15 years and when the opportunity arose to expand the family business to Tehachapi, Chantha jumped at the chance. Once having thought about moving to Texas, she said, "I've found a better place."

Lay said that her entire family is involved in making donuts. Her parents learned when they first arrived in the United States from Cambodia. They settled in Orange County and began working at Winchell's, learning how to make donuts.

"My dad started making donuts long before I was born," said Lay.

About 20 years ago Lay's family moved to Bakersfield. Working seven days a week, they perfected their techniques working in local donut shops before buying Foster's, which at one time was a franchise. The family still works seven days a week. Lay said that it was her mom and dad who decided to start serving the delicious "cronut," a yummy donut made with croissant dough and a cream filling.

Not only does Tea Donuts have the cronut, but they have croissant sandwiches and fritters in addition to all the donut varieties you would expect to find in a donut shop. Lay said that her father, John Pe, makes all the donuts at Tea. The dough is made around 10 p.m. and is allowed to rise. Lay's father arrives in Tehachapi about 1 a.m. to begin baking the donuts. The store opens at 4:30 a.m. and he stays until Lay arrives after taking her son to school. Lay says that her 8-year-old son also loves to bake and helps on weekends.

Since you can't have donuts without coffee, Tea Donuts serves Farmer Brothers coffee. They are currently serving smoothies and will soon be adding ice-blended coffees. She said that she also plans to offer spiced chai and seasonal coffees like the Black Tie which includes a mix of white and dark chocolate. A full sandwich menu including such favorites as pastrami, chicken and tuna will also soon be offered as well.