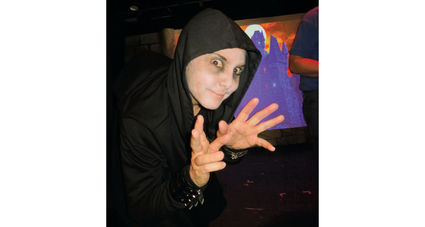 Chris Morales plays Dr. Frankenstein's long-suffering factotum, the hunch-backed Igor, pronounced 'Eye-gor.' Her expressive hands and eyes, together with a contorted crouch as she capers around the stage, evoke the campy whimsy of Mel Brooks' original movie character, played by Marty Feldman. Morales is a stand-up comedienne, member of SAG and a real estate agent. In the background, one scene of the video projection that moves the story along. 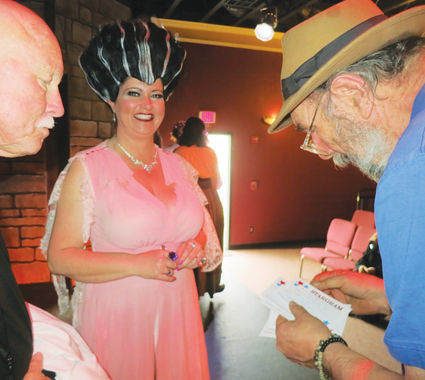 During one performance of Tehachapi Community Theatre's (TCT) musical "Young Frankenstein," a member of the audience was heard to say, "It feels good to laugh."

The spontaneous remark likely was the sentiment of every patron of the sell-out houses that have filled the BeeKay's seats during the production's four-week run. The musical, written by Mel Brooks and Thomas Meehan, based on the Brooks' classic 1974 movie of the same name, recreates the most memorable dialog and scenes from the movie, fleshed out with musical production numbers.

"It was a real challenge to put on," director Gary Michael Mazzola said. "There are a lot of moving parts."

Actors in the lead roles are Guy Martin as Frederick Frankenstein, David Shacklock as the monster, Chris Morales as Igor, Jamie Uhtof as Inga, Christal Wheeler as Elizabeth and Ruthanne Jennings as Frau Blucher (whinny!).