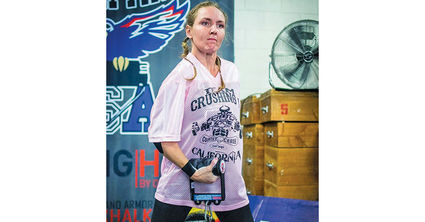 This May, Autumn Cote, 36, will represent the United States in the Armlifting World Championships in Russia.

Strength comes from so many places and Autumn Cote's strength reaches far beyond her incredible physical accomplishments.

This May, Autumn will be traveling to Russia to compete in the Armlifting World Championships, representing the United States in the women's 60 kilo or 132-pound class.

"I am very excited. I am nervous this will [be] by far the biggest stage I will have ever competed on. To represent our country makes it even more important," she said.

The 36-year-old has been strength building since early 2014. She and her husband Ray moved back to Tehachapi in 2016.

Autumn found inspiration from her husband Ray to begin her training. As Autumn put it, he has found great success in sports and no matter what he's doing, he always works hard to be his best.

"If he cannot reach [his] goals, which does not happen often, but when it does, he does not look at it as a failure. He looks at it as a lesson ..." Autumn said. "He is my ultimate inspiration."

Ray has to deal with a lot of physical pain, but that doesn't stop him.

"He is an amazing father to our 6-year-old ... [when he] wants to play, Raymond is there to play regardless of his pain level," Autumn added.

Autumn also pushes herself to be her best to set a good example for her son and 2-year-old daughter.

"I push myself because I want to show my son that the only handicaps we have are the ones we impose on ourselves," she said. "I also want to be a role model for my only daughter. I want her to see that women can be powerful and independent and be soft and feminine."

We all face moments in life that can either break us or compel us to strive for better. When that moment came for Autumn, she pulled from her inner strength and has become a real life superhero for those around her.

Autumn is a survivor of sexual assault and she uses strength building as a way to push past the pain from her past and to be an example to other women who share her story.

"Ladies who have been raped and you know who your attacker is, I encourage you to speak up, to share your story to whomever you would trust," she said. "Because if you bottle it in then all you are doing is allowing your attacker to rape you over and over. Take your life back, take control of your day, do not live in fear."

Autumn added, "I was a wreck until I found strength building. Armlifting has allowed me to release a lot of anger. So my past pain is what motivates me to keep pushing and growing both as an athlete and more importantly as a person."

Autumn loves introducing her passion to other woman and invites people to come train with her.

Good luck this May, Autumn. You already make your community very proud.

A message from Autumn:

"I want to recognize the people who have pushed me to this level. My Sponsors: Ashmore Motors - the Ashmore family have been so kind to me. They have sponsored me in some form or other. They are truly a blessing and a big part of my success. BVS Reality - Beth Hall who was my husband's realtor when we purchased our home has always given to us. Now the BVS office has sponsored me to get to Russia. Native Strength & Iron - John Knuckle. ATRAIN MMA - Anthony Appello. Warrior Genetic Labs - Derrik Pickney. Abominable Grip Chalk - Ty Mylan. Skull Smash Ammonia Inhalants. Country Crush Weight Handles. Ultimate League Vacation Club - Peter Mills. Muscle Sport Magazine - Joe Piatero.

"Thank you all for your support!"