Becoming an astronaut – a dream come true for Mark Stucky

Exciting dreams come true at Mojave Air & Spaceport! Dec. 13 produced a calm, crisp morning and there was excitement and an edgy sense of accomplishment hanging in the air around the Virgin Galactic team who have worked so diligently to reach this day; seeing SpaceShipTwo "Unity" climb into space.

The attempt to soar 264,000-feet, or 50-miles, above the surface of Earth, beyond the boundary of what the U.S. government deems as space, was a milestone for the team and TheSpaceShipCompany at Mojave Air & Spaceport. (When Scaled Composites SpaceShipOne won the Ansari X-Prize, Fédération Aéronautique Internationale or the International distance was set at 62-miles above the Earth, 100-kilometers or 328,000-feet. It depends on which organization you ask where "space" begins. For international "standards," the Kármán Line is at 100Km above sea level. However, NASA and the USAF use 50-miles above sea level for certification).

The December test flight had two pilots onboard, four NASA research payloads and a mannequin named Annie, as a stand-in passenger. They reached an altitude of 52-miles above the Earth and a speed of Mach 2.9. The sonic boom was heard by all on the ground as Unity rapidly glided back to runway 30 at Mojave Air & Spaceport.

Sir Richard Branson, founder of Virgin Galactic, came to Mojave the day before with his family members. He is passionate about the thrill of the human spirit going to space and to experience the sight and majesty of planet Earth from above. When the company begins their commercial space service, they will be taking anyone willing to pay $250,000 to witness a "million dollar view!" For these lucky few, being in the black sky, to feel weightlessness and to look down and see the curvature of our beautiful home planet will be emotional, spiritual and the greatest of inspirations.

Nicola Pecile and Mike Masucci, were piloting the mothership, White Knight Two, which would carry the rocket ship, SpaceShipTwo, up to its release point. In SpaceShipTwo were two USMC veterans; pilot, Mark "Forger" Stucky and co-pilot, the former NASA astronaut, C.J. Sturckow.

Sturckow is a USMC fighter pilot veteran and flew a total of forty-one combat missions during Operation Desert Storm.

Anxiety filled the huge audience on the flightline as the mother-ship, with SpaceShipTwo attached underneath, lifted from runway 30 at 7:11 a.m. at Mojave Air & Spaceport. Watching them climb out was a beautiful and uplifting sight to behold.

Stucky remained focused on the flight, but knew in his heart that this was the day his dream of becoming an astronaut would be fulfilled.

From his early childhood, Stucky was enthralled with the idea of going into space. At the age of three, he watched on his father's television set as John Glenn's rocket left the launch pad. The mesmerizing image stayed with him all through his childhood. Again Stucky was absorbed in the thoughts of going to space when he was in grade school and read an old National Geographic which had an article by U.S. Air Force pilot Joseph Walker about the X-15 – half missile and half airplane. Walker described an X-15 flight: "Acceleration from that inferno in the tail pipe pinned me back in my seat."

His adventuresome spirit came to life at the age of 13 while reading another article about hang-gliding and somehow, he convinced his father to split the cost of a hang-glider. Once he tasted the magic of flying, there was no stopping him – he was in love with the whole idea of being in the air, rather than on the ground.

He graduated from Kansas State University with a major in Physical Science, served in the U.S. Marines and received training as an F-4 Phantom pilot. Later he worked at NASA and this outstanding pilot, with the eyesight of a hawk, applied with them to be an astronaut and twice he almost made it, but didn't accomplish his dream.

He resigned from NASA, flew for the airlines for a while, and then he went active duty with the Air Force in 2003. A year later, he deployed to Iraq and served four tours of duty. While in Iraq, he watched a broadcast of Burt Rutan's SpaceShipOne launch in June 2004. Then and there, the thoughts of becoming an astronaut filled his head, as he watched Mike Melvill rocket upwards at Mach 3 in SpaceShipOne.

In April 2009, Stucky accepted a test-pilot position with Scaled Composites. His portfolio included the SpaceShipTwo program.

A week before Burt Rutan and Scaled Composites won the X Prize in 2004, Branson announced the formation of Virgin Galactic. He had made a deal with Paul Allen, who was financing the SpaceShipOne project, that he would secure the right to adapt Rutan's design for space tourism.

Branson knew nothing about building or flying spaceships and contracted with Scaled Composites in Mojave to design, build, and test a new mother-ship, White Knight Two and a much larger space vehicle, able to carry two pilots and six passengers, SpaceShipTwo. 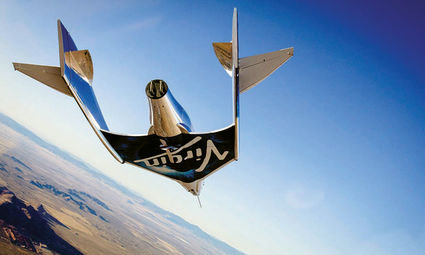 SpaceShipTwo "Unity" gliding back to Earth

Stucky's perseverance of keeping the dream alive in his mind paid off. After suffering thorough many obstacles during his life, even a life threatening hang gliding accident, his dream of space came true on that beautiful December morning.

After the flight, an additional "love is in the air" wish came true that morning when Stucky handed Branson a small box. A flight-test engineer on Stucky's team, named Brandon Parrish, had asked Stucky if he would carry an engagement ring into space for him. Parrish called his girlfriend, Veronica McGowan, a fellow-engineer, up onto the stage, Branson handed the small box to him and he proposed to McGowan.

See you on our next flight! Wishing a Happy 2019 to all of our dedicated and fantastic readers!