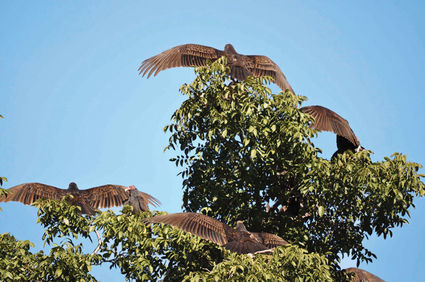 The turkey vultures stretch and warm their wings in the morning in what is called the "horaltic pose" before they take flight.

Fall is here and the birds are moving from their summer breeding grounds in North America to the wintering grounds in Central and South America. As birds fly south they need places to rest and replenish on their way. One of the largest concentrations of migrating Turkey Vultures in North America comes down the Sierra Nevada, through the Kern River Valley and the Tehachapi area. Look up and you may see "kettles" of vultures swirling up into the sky.

We know that some of our readers don't know why these wonderful creatures are traveling through the area so we are providing the following information reprinted from our September 2011 issue of The Loop:

These birds travel up to 200 miles per day, so they deserve a break as they continue on their southerly migration.A common sight in the evenings at this time of year, they can be seen in large numbers soaring close to the treetops looking for a roost. After a good night with pleasant dreams, they stretch wings, catching some morning rays to dry before floating into the sky.

Seeing hundreds roosting in the treetops in downtown Tehachapi in the mornings is a common sight. Turkey vultures usually don't begin flying until a few hours after sunrise; after the air has been warmed by the sun. A few slow flaps of their wings and they soon join a thermal and continue their voyage south.

They gain altitude on pockets of rising warm air, called thermals, by circling frequently until they reach the top of the thermal. They are then able to glide across the sky at speeds up to 60-miles per hour, while gradually losing altitude. When they need to gain more altitude, they locate another thermal and the process of circling, rising and then gliding begins again.

Turkey Vultures can cover many miles going from thermal to thermal without ever needing to flap.

The groups of Turkey Vultures you see soaring are a "kettle." As vultures catch thermal updrafts they take on the appearance of water boiling in a pot – hence the term "kettle."

We see just a small number of the some 25,000 that pass through on their migration south. This Pacific Flyway vulture migration is one of the five largest known in North America.

Turkey Vultures have been reported by aircraft pilots to rise as high as 20,000-feet and soar for hours without flapping their wings. 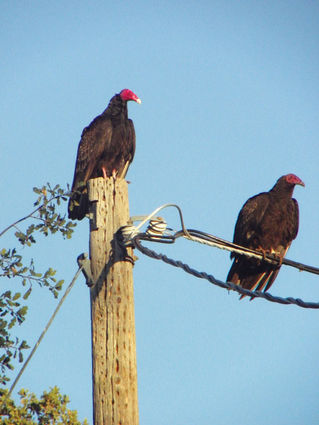 Up close and personal.

The Turkey Vulture (Cathartes aura) which is Latin for "cleansing breeze" is a fascinating creature. They are among the most abundant raptors in the world.

The vultures begin to gather in large flocks in August and start heading south in earnest by September, with their numbers reaching a crescendo at the end of September. By then the colors of the valley begin their change from green to yellow with the bloom of the Rabbitbrush, and many migrating birds and butterflies begin their southward voyage in advance of the approaching winter.

Turkey Vultures travel south, at least as far as Colombia and Venezuela. Some believe that many of these birds travel as far south as Brazil and Argentina. Millions of migrating Turkey Vultures have been counted annually at migration watch sites in Mexico, Costa Rica, and Panama.