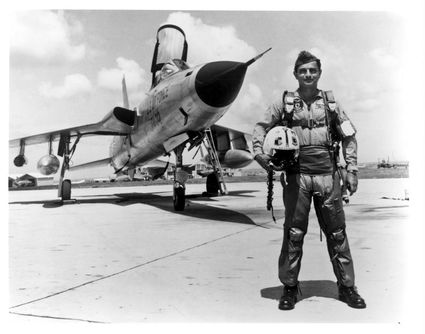 Cardenas in front of F-105 in Southeast Asia.

Do you know the feeling of meeting a person and instantly there seems to be a connection? That often happens to me when meeting folks from the aviation community. In 2005, at the Aerospace Walk of Honor in Lancaster, we displayed our UH-1H helicopter and also attended the black tie banquet held that evening.

My husband Al and I were visiting with a group of people and we struck up a conversation with a gentleman we had not met before, but immediately found ourselves reminiscing about mutual friends from Edwards AFB, historic aircraft and finally his wife reminded us that it was time to sit down for dinner. I think we could have talked right through dinner and not even missed eating that night!

Brig. Gen. Robert and Mrs. Robert Cardenas were delightful and he is a giant aviation legend who flew at Muroc and Edwards AFB. He is one of a handful of living icon test pilots that we have the distinct pleasure of knowing.

Brig. Gen. Robert L. Cardenas, USAF, was one of five test pilots honored on the Walk of Honor in 1995, along with Capt. Glen W. Edwards, USAF; Fred W. Haise; William C. Park and Brig. Gen. Guy M. Townsend, USAF. Check the Aerospace Walk of Honor website at http://www.lancastermoah.org/walk-of-honor to see all the test pilots honored from 1990-2005. The list is a "Who's Who" in aerospace history.

General Cardenas was born at Merida, Yucatan, Mexico in 1920. He attended schools in San Diego, Calif., and graduated from the University of New Mexico at Albuquerque in 1955 with a Bachelor of Science degree in mechanical engineering. His military career began in 1939 when he became a member of the California National Guard. He entered aviation cadet training in September 1940 and received his pilot wings and commission as second lieutenant in July 1941.

During World War II, he served as a B-24 aircraft pilot in the European Theater of Operations with the 506th Bombardment Squadron. He arrived in England on January 4, 1944 and was based at Shipdam, Norfolk. Cardenas flew his first mission on January 21 that year in B-24H "Southern Comfort." On March 18, 1944 (on his 20th mission) while flying as command pilot aboard B-24J "Sack Artists" the aircraft in which Cardenas was flying was badly damaged by anti-aircraft fire and enemy fighters. The target was the Manzell Air Armaments plant at Freidrichshafen, Germany. The right wing of the aircraft had been badly damaged after a shell had gone through setting both the right engines ablaze. Cardenas had been injured when a piece of flak pierced his helmet causing a head wound.

The crew had to bail out as the crippled B-24 headed for the safety of Switzerland. After Cardenas and the crew bailed out, the aircraft exploded and the remnants fell to the ground in Switzerland. Cardenas landed on the shore of Lake Constance on the German side and had to swim across the lake to the Swiss shore. After making contact with the local resistance he made his way into France where the French Resistance helped him get back to England.

In the summer of 1947, Colonel Albert Boyd had selected Capt. Chuck Yeager as pilot, Lt. Bob Hoover as back-up pilot and Capt. Jackie Ridley as Project Engineer. Boyd selected Cardenas as Officer in Charge of the X-1 project at Muroc, Calif. and as pilot of the B-29 launch aircraft. Cardenas was the B-29 pilot on all of Yeager's flights up to and including the first supersonic flight on October 14, 1947.

In December of 1947, Cardenas made his first flight in the Northrop YB-49, "flying Wing." Cardenas was designated Principal Project Pilot for the YB-49 test program and flew the evaluation tests, from which a decision to purchase the YB-49 would be made. He was given an opportunity to complete his engineering degree at USC and Capt. Glen Edwards was chosen to complete the YB-49 flight tests.

During this time, Cardenas checked Capt. Edwards out in the YB-49 and then went back to Dayton, Ohio to marry his fiancée Gladys. It was June 5, 1948, on the way to his parent's home that the young newly weds heard the tragic news of the crash of the YB-49.

Cardenas was selected to continue the flight test work on the YB-49 and set a record in February 1949 when he flew the "wing" from Muroc to Andrews AFB in 4 hours 5 minutes, setting a new transcontinental record. 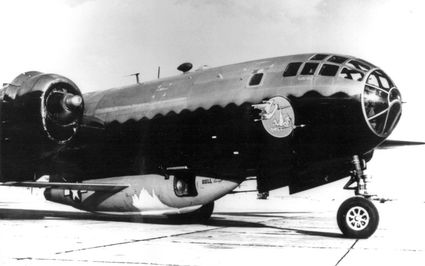 Cardenas continued to test Fighters and Bombers at Edwards AFB and Wright Field until 1955 when he was assigned to the famous 51st Fighter Interceptor Group (F-86's) as a Wing Commander at Okinawa, Japan. He told Al that he envied him having an F-86E; it was his favorite fighter aircraft. He flew Republic F-105's in Southeast Asia during the Vietnam War as commander of the 18th Tactical Fighter Wing in 1964.

He served as a trustee with the Flight Test Historical Foundation at Edwards AFB and served as a member of the San Diego Mayor's Veteran Advisory Board and as a Director on the Board of the veterans Memorial Center & Museum (VMC).

What a great USAF veteran who has further served America, by helping to preserve the history and the aircraft that served this country for the past 70 years!

Gen. Cardenas is living in San Diego and is 98 years old this year! We send him our every good wish and sincere thanks for his incredible service to our great nation.