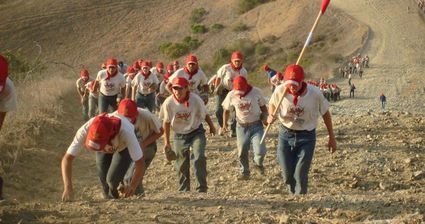 Devil Pups making the arduous climb up the mountain named "Old Smokey," where they receive their challenge coin.

Many adults may think that America's teens will not be prepared to lead this nation in the future because America's teens have all gone soft. Think again. A summer camp that prepares young men and women, ages 14 to 17 for what life will bring them may seem like a valuable venue. However, it takes on a new meaning when it is instilled by sweat and by active duty Marine Corps Corporals and Sergeants yelling and hurrying these teens throughout their day and guiding them through their training.

That is exactly what happened for 600 teenagers from California, Nevada, Arizona, New Mexico and Utah at Marine Corps Base Camp Pendleton this July. The 10-day program is divided into two increments of 300 teens each and ended with an impressive graduation and awards ceremony at the base on Saturday, July 28.

The Devil Pups Youth Program for America was created in 1954 as a better way for teens to spend part of their summers in a military environment. U.S. Marines were referred to as "Devil Dogs" in World War I by enemy troops for their battlefield accomplishments and "never give up" spirit. The Devil Pups name is descended from this Marine Corps heritage.

Additionally, Cruz Gutierrez, Andrew Gomez, Xavier Reyes and Travis Sturckow were presented awards for attaining perfect scores of 400 points out of a possible 400 points in the Physical Fitness Test consisting of a one mile run, sit ups, pull ups and push ups. Under the watchful eyes and "encouragement" of specially screened and selected Marine Corporals, Sergeants and Officers, camp participants complete days full of tasks like working up from a one-mile run to a five-mile beach run, 25-foot tower jumps into a swimming pool and a heart-pounding, legendary hike up "Old Smokey," a mountain overlooking the School of Infantry and the Pacific Ocean.

At the culmination of that hike, a challenge coin ceremony was conducted at sunset, presenting each successful participant with a keepsake of their accomplishments during their camp. This year's camp included a trip to the aircraft carrier USS Midway Museum and the Marine Corps Recruit Depot Museum in San Diego. Marine Colonel Daniel Yaroslaski, Commanding Officer of the Assault Amphibian School was the speaker and Reviewing Officer for Saturday's graduation. Additionally, Yaroslaski attended Devil Pups in 1987 as a teen.

"Devil Pups is fantastic. Over 300 young men and women come together from across the Southwest, and most have not seen each other before. And they learn the value of teamwork, the value of helping others to be successful. They realize they can accomplish things because they are not there alone," Yaroslaski said.

Camp began at "Oh my gosh, it's early," around 5 a.m. on most days. These teens slept in Marine Corps barracks and ate Marine Corps food. Running, hiking, close-order drill, martial arts and swimming were followed by role model speakers and more physical training. Most days also include conditioning hikes, and yet more physical fitness training. Two nights were also spent on bivouac, which is much like a campout under the stars without the campfire songs and marshmallows.

The Devil Pups program is behaviorally oriented and tailored to build self-confidence and discipline through a series of mental and physical challenges and that is putting it lightly. Devil Pups strives to develop its participants, qualities of confidence, courage, self control, discipline and good citizenship. Teens also attend classes on history, first aid, leadership, teamwork and respect for others, their family and their Country.

Retired Marine Corps Colonel Trace Deneke, the Devil Pups Encampment Commander, states that graduates realize they can accomplish much more in life than they ever felt possible.  He said that commitment and perseverance are two valuable traits the program seeks to instill into those who ultimately graduate from camp, in addition to learning how to overcome one's fear. Col. Deneke states the program's goal remains the same today as it was in 1954, "to develop better citizens, based on our philosophy of "Growth Through Challenge."

Applications and tryouts for next summer's Devil Pups camp will begin in January 2019. For information about Devil Pups or how to apply, visit: http://www.devilpups.com, or e-mail [email protected] or (661) 376-0271.