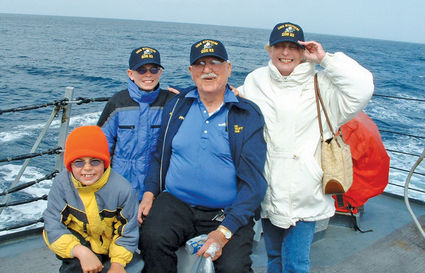 Cal and Cathy and Cathy's grandsons, Michael and Matthew Burdick aboard the USS Stethem (DDG-63).

Our good buddy at Bakersfield Council Navy League, Cal Emerson, passed away Wednesday morning, June 13, 2018. He was 91. His daughter Sandy believes it was a heart attack. Please keep her in your prayers. A military funeral is being planned at the Bakersfield National Cemetery in Arvin on June 28 at 10 a.m.

Cal helped us out with the cooking chores at a Navy League Luncheon at the Hansen Hangar in September 2004 and was one of the outstanding volunteers for the O'Callahan Division Sea Cadets. He was one of the hardest workers I have ever met. Nothing slowed him down!

Cal served aboard the U.S. Navy destroyer, USS Bancroft, DD-598 as a Gunners Mate. I will always cherish the beautiful 48-star flag that Cal presented to me. The flag had flown on his ship during the war. He gave the flag to me when the Bakersfield Navy League came to Mojave Airport to watch the Condor Squadron on Dec. 7, 1998.

I did some research and found that the Bancroft was launched on Dec. 31, 1941 and served at Dutch Harbor, Alaska and remained in the Aleutian Islands until August 1943.

She operated in the Wake Island raid in early October 1943, was part of the Tarawa, Gilbert Islands raid in September, and occupation later in the year. Bancroft participated in the seizure of Kwajalein, Marshall Islands, in early 1944 and the Truk-Satawan-Ponape raid in April, the Wotje Island, Marshall Islands, raid in May; the Saipan occupation in June and July, Maloelap Atoll, Marshall Islands, raid in August; the Philippine Islands operations in March and April 1945; and the Borneo operations from May until July. The Bancroft received eight battle stars for her World War II service.

Cal served aboard the Bancroft from July 1945 until January 1947. He is a stalwart member of the Fleet Reserve Association and worked diligently on their ongoing restoration project of a 37-foot model of the USS Arizona (BB-39) beginning in 1998.

The model was born when movie model makers created three 37-foot models of U.S. battleships for the movie "Tora, Tora, Tora." The movie depicted the infamous Pearl Harbor attack in 1941. After the movie production, the models went their separate ways.

One was restored as USS Arizona, (BB-39) and was "home ported" in Phoenix. Another went to Seal Beach and the third sat in the movie studio storage area for years before it was finally given to the Bakersfield Fleet Reserve Association.

The ship sits up on a cotton trailer and was parked in Cal's driveway the last time I saw it. Volunteers worked on the ship for over seven years. The Fleet Reserve Association displayed this impressive model in parades and at events honoring the Sea Services. I'm not sure where the ship is now.

We love our memories with him flying and going on Navy League ship cruises. In 2005, Al and I took our grandsons, Michael and Matthew out on a dependent's cruise aboard the USS Stethem (DDG-63). We met Cal Emerson on the dock. What a fabulous time we had! 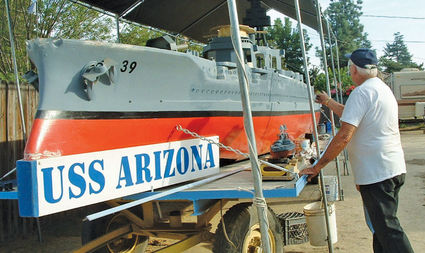 Cal had brought about 15 of his model airplanes to display during our meeting and was putting them away when Al came up to him and said, "Hey Cal, I have to drive down to Lancaster and pick up the Huey, do you want to come along and fly home with me?"

Cal didn't miss a beat with his reply, "I'll fly in anything, anytime!"

Our UH-1H had been on display for the City of Lancaster's annual event. Cal had a big smile when they arrived back at Mojave Airport. All in all, we had a successful day and felt we had accomplished some goodwill here at home and with our neighboring friends in Lancaster.

Thanks Cal for being such a wonderful friend and stalwart member of Bakersfield Council Navy League. Cal never missed a meeting! We loved you so much and will miss you terribly. Prayers for your daughter Sandy and other family members.