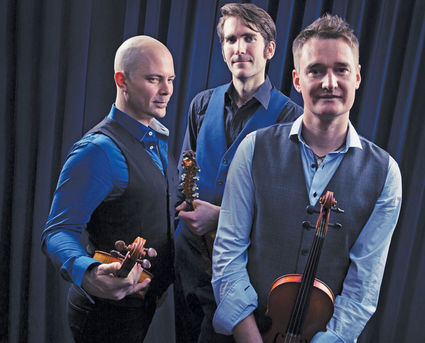 The name, Fiddlers Crossing, will be freshly interpreted on Saturday, April 21, when The Nordic Fiddlers Bloc comes to town. This trio is a crossing of fiddlers from Norway, Sweden and the Shetland Islands of Scotland. The three distinct fiddle styles are intertwined to create a unique blending that pushes boundaries yet remains true to their traditions. The concert will take place at 7 p.m. in Mountain Bible Church, 630 Maple Street, Tehachapi.

While all three members of the trio play fiddle, they also employ the viola, the octave violin and the hardanger. The hardanger is the national instrument of Norway. It's played like a fiddle but has sympathetic strings that lie underneath the playing strings and resonate to produce a magical sound. Hardangers are also beautiful, with ornate artwork, pearl inlay and a carved dragon head at the scroll. It is traditionally used to accompany dances.

All three members of the trio are master musicians in their own traditions. Olav Luksengard Mjelva, from Norway, began playing the fiddle at age seven. He has received several awards, including the Norwegian equivalent of a Grammy for his solo debut album. In 2013, he was named Norway's folk musician of the year. Olav is highly sought after as a studio musician and has played on more than 50 CDs. He is also an instructor and dance musician both in Norway and abroad.

Sweden's Anders Hall plays fiddle, viola and hardanger and has studied in Norway, as well as in his home country. He is considered a creative and gifted musician on the Nordic folk music scene, fitting together old traditions with innovative ideas and expressions.

Kevin Henderson comes from the Shetland Islands, one of Scotland's archipelagos with a rich fiddle tradition. Starting fiddle at age nine, he took private lessons with the great Shetland fiddler Willie Hunter. He is a member of Shetland's Fiddlers' Bid, and super groups Boys of the Lough and Session A9. Kevin has toured extensively throughout the world as a solo performer and with groups.

For this concert, Camp Kiya cello instructor Alex Wilson will add cello on some tunes to this cross pollination of fiddle styles. Alex teaches cello privately and in the Bakersfield schools. He is assistant principal cellist with the Bakersfield Symphony, and has developed his Celtic cello style under the tutelage of Alasdair Fraser and Natalie Haas.

Through the combination of these fiddle family instruments, the Nordic Fiddlers Bloc is able to present a depth and variety of melody, harmonies, rhythms and percussion in different tones and textures that seem to come from more than just three players. The music ranges from intricate reels to lush waltzes and even their unique take on American and Scottish tunes. Some of the music employs the traditional old scale system (raised fourth) and asymmetrical rhythms of traditional Norse dance music.

For more information and to hear samples of The Nordic Fiddlers Bloc go to http://www.fiddlerscrossing.com and http://www.thenordicfiddlersbloc.com.

Tickets may be purchased next door to Fiddlers Crossing at Mountain Music, Tehachapi Treasure Trove, Tehachapi Furniture in Old Town, Lucky's Barbershop, online at Fiddlerscrossing.com or with a credit card by calling (661) 823-9994. Tickets to the concert are $25 for adults and $15 for students. The concert begins at 7 p.m. Doors open at 6:30 p.m.

On the Horizon: Bryan Bowers, Guy Davis and The Quitters.