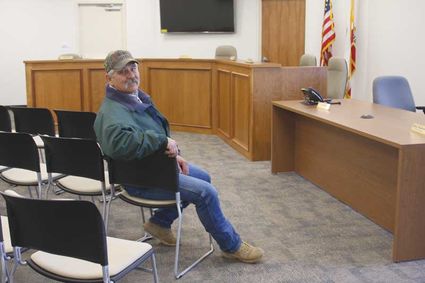 While he is more comfortable outside "moving dirt" and patching pipelines, Alex Steele did Forde Files a favor and showed off the new Tehachapi-Cummings County Water District board room. The spacious room, located in the former machine shop at the district's Jacobsen Reservoir headquarters, comfortably holds at least 50 people.

The first order of business at the Tehachapi-Cummings County Water District Feb. 21 board meeting was to pass a resolution commending Pipeline Superintendent Alex Steele for 40 years of service to the district.

Steele was 20 years old. After his 1976 graduation from Tehachapi High School, he worked for the Tehachapi Valley Recreation and Park District, Revere Aluminum in Mojave and as a custom farmer picking cotton in various states.

"I would borrow water district equipment," he said. "They wanted to hire me." When the offers came, he usually was out of state and they couldn't get hold of him.

One day when he was home, someone knocked on his door to renew the offer.

He said, "Let me get my jacket," and he started right away.

A few times, Steele said, he started to leave the district to join the fire department.

"Every time, [water district Manager] Bob Jasper would get wind of it and ask me to stick around."

He did stick around for the next 40 years and counting.

Steele began as an apprentice pump plant mechanic and was transferred temporarily to supervise the pipeline after a person quit. The temporary became permanent.

Steele, 60, has worked under all four managers of the water district, which was created by visionary men in 1962 to pump water 3,000 feet up the hill from the Central Valley. Pumping began in 1972-73.

"I really enjoy it," Steele said. "I feel blessed to be able to work here this long. The water district is the key to development and what all the communities have grown to. Without the district, the communities wouldn't be here. When they formed the district, they were talking about a building moratorium. The groundwater would not support the community. The basins were over drafted for several years." 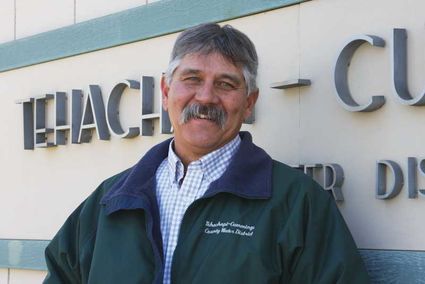 There must be something in the water, as his crew are also long-time water district employees. Farrell Loyd started in 1987 and has 31 years of service. Joe Sasia began in 1988, and has 30 years of service. Brian Copus began in 1996 for 23 years employment and the "new guy," Cale Lykins, began in 2013 and has worked for the district for five years.

Steele, who ran a hunting guide service in the 90s, has been married to MaryAnn for 28 years. They have four children, the youngest of whom is 13, and Steele has two older daughters. He is a woodcarver and works with the Tehachapi Youth Football program, which he helped develop.

When his daughter Tawnya was a cheerleader in high school, he got involved with the building of Benz Visco Park and liked working the heavy machinery.

"I love heavy equipment," he said. "I love moving dirt.

Steele plans to work for several more years and then, astride a big machine, "I'll be moving dirt."