Women in prison is AAUW topic 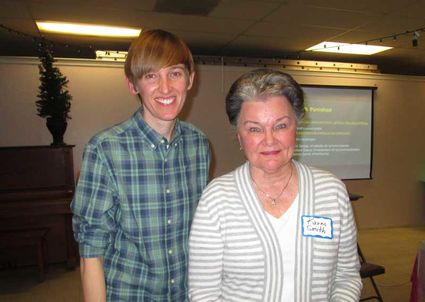 Sentences of life in prison are on the rise as opposition to the death penalty has become more prevalent. One third of these sentences specify there can be no parole. Colby Lenz began her remarks to American Association of University Women with these statistics.

Colby has been studying women in prisons in preparation for writing her dissertation as she seeks a Ph.D. in American Studies at University of Southern California. A fellowship from AAUW has enabled her to devote full time to this pursuit. Since 1881 the AAUW has encouraged women to further their education by awarding grants and fellowships.

Colby has conducted in-depth interviews with imprisoned women serving life without parole. She calls such sentences a walking death sentence. Many of these women have been convicted of survival crimes because of their response to domestic violence. As she realized the difficulties women face living in prison, she has become an advocate for them. She is a co-founder and organizer for Survived and Punished, a group that reaches out to women in prison who have a history of physical or sexual abuse prior to incarceration.

AAUW members learned many interesting facts from Colby Lenze. The United States incarcerates a greater percentage of people than any other country. California has two prisons for women, one at Chino and one at Chowchilla, which is the largest women's prison in the world. Since 1980 women have been imprisoned at twice the rate of men.

Members asked Colby many questions and encouraged her to continue advocating for women. She was thanked for her presentation by AAUW Program Vice-President Laura Amstead.