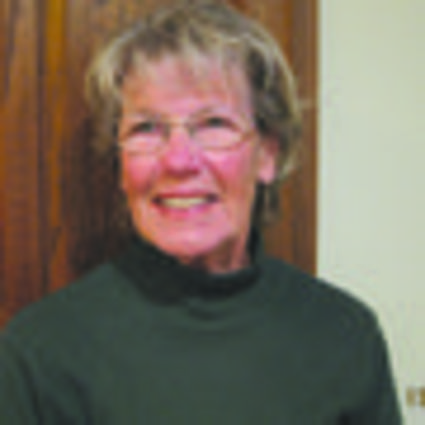 After living in Chino, Calif. for 43 years, Ron and Linda Little retired and decided to move from a community that they felt had become over-crowded and difficult to move around in. It is a story I have heard repeated over the last year or two. I can remember when the Inland Empire was promoted as the place to move if you wanted affordability and space to improve your quality of life. On their retirement it was time to look for something different. Their daughter Sheila lives in Tehachapi so this area seemed an obvious place to look. At the time of their retirement, Linda was working as a crossing guard for the school district and Ron was managing Newsboy Books, a large book store in Ontario.

Ron was born in Omaha, Nebraska. His family moved to California when he was three years old. They settled in North Hollywood but had moved to Gardena by the time he started kindergarten. After high school he worked for 10 years in computer mainframe repair. The following 19 years were spent driving a truck for Albertson's. He retired from truck driving four years ago, so Newsboy Books was actually his retirement job.

Linda also came to California around the age of three. She was born in Rapid City, South Dakota and the family moved to California and settled in Cudahy (near Bell) in Southern California. They eventually moved on to Fullerton.

Ron and Linda have two children, Sheila and Robert. Sheila has called Tehachapi home for 20 years. She has two daughters in their 20s. Robert lives in Fontana in the Inland Empire and has a son and daughter in their late teens.

Ron still has a passion for off-roading and pistol shooting and is looking forward to better weather for that. Linda said that she is just as happy reading in the company of the family pup, Maggie.

Welcome to Tehachapi, Ron and Linda. You have picked the perfect place to retire.

Annie King said that she and her husband Hank Rodgers "have been sweethearts for 49 years and married for 11 ½". He was her first boss at Orange County Superior Court when she was 23 and he was 30. Over the years, she said that they maintained what she calls a "semi-long distance" relationship.

Their move to Tehachapi at the beginning of February is really a homecoming for Annie who lived in Bear Valley Springs for 14 years but left 21 years ago to join Hank in Santa Barbara.

Annie was raised in Los Angeles and then moved to Orange County. She said that she had friends living in Tehachapi who invited her to visit. She came for a visit and stayed, adding that at first she lived in a campground up on Paramount in Bear Valley. She worked for Sierra National Bank (now Bank of the Sierra) starting on the day they opened their doors. She was CFO of Tehachapi Lumber and then moved on to the Tehachapi News where she worked with Bill Mead and formed a friendship with Al Crisalli. By that time she had built a house in Bear Valley and when it was time to join Hank in Santa Barbara, she sold her home to the Crisalli family.

Hank was born in Alton, Illinois and came to California with the US Marine Corps. He was in the Marines for 18 years and on his release he decided to stay. For 40 years Hank served as Executive Officer for the courts of Orange, Ventura, and Santa Barbara counties. He said that he was in Ventura the longest, from 1972 to 1989. It was while he was with Santa Barbara Superior Court that Annie moved away from Tehachapi.

Eleven years ago they married and moved back to Orange County, living an idyllic life on a small ranch that they built in Silverado Canyon. However, the Silverado Canyon area is prone to wildfires in dry years and escape routes are few. In the last several years it has had more than its share. So Annie and Hank began to think about moving. It was Annie's fond memories of Tehachapi that lead them to look for a home here. Annie said that their Silverado Canyon home sold in eight days so they figured the move was meant to be.

A huge welcome to Annie and Hank; we are glad to have Annie back and expect that you both will be a great addition to our community.