The year ahead in space

Sky Watch - Keeping an eye above the horizon! 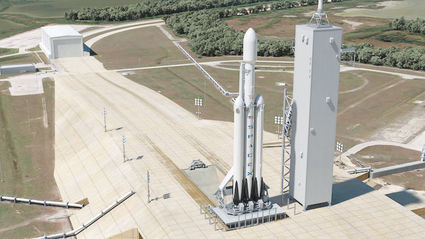 SpaceX has already launched two Falcon 9s from the hallowed site of the Apollo 11 launch. When Falcon Heavy lights off, the seabirds will come to life for a radius unseen since 1973. Credit: SpaceX

This winter has been unusually brutal for Tehachapi astronomers (and less than optimal for local pilots). I was happy to seize any opportunity for a little binocular time with the Orion Nebula and the Pleiades. With the weather certain to improve, it's time to resume my monthly column on all things aerospace.

Despite growing tension with Russia, all is well aboard the International Space Station. Camaraderie is high and we're still getting rides on their Soyuz rockets. Still, I'm glad that Boeing and SpaceX are progressing with their plans to provide American access to the station. That goal is expected to be met next year, with unmanned test flights beginning this spring.

However, the real news came when Elon Musk announced that SpaceX is planning to send two paying passengers (whose identities are being withheld for the time being) on a trip around the moon. This Apollo 8-style mission is planned for "late next year." This would be the first time that anyone has ventured beyond low earth orbit (LEO) since Apollo 17 in 1972. When Mission Commander Eugene Cernan prepared to leave the lunar surface, he remarked that he hoped he wouldn't die with the title of "Last Man on the Moon." We lost him last January. What a shame; he would have loved to at least know of this new SpaceX adventure!

In response, NASA is looking into what it would take to put people aboard the first Orion/Space Launch System flight to the moon. The unmanned EM-1 mission is currently scheduled for launch late next year.

SpaceX also plans to send a special unmanned version of their Dragon spacecraft, Red Dragon, to Mars next year. This will be the first private mission to another planet. NASA has agreed to support the mission with their navigation and communications capability in exchange for data from their bold new approach to atmospheric entry, descent, and landing on Mars. If successful, it would be an important technological advancement in preparing for a manned mission.

Both of these ambitious SpaceX missions will rely on the success of the new Falcon Heavy rocket. SpaceX has leased historic Launch Complex 39A from NASA to support it. Two Falcon 9s have already been launched from the site. When the first Falcon Heavy lifts off, it will become the biggest operational rocket in the world, capable of carrying more than twice the payload of even the Space Shuttle. With five million pounds of thrust, it's classified as a "Saturn V-class" rocket--very fitting, considering its launch site. It will have been 44 years since a rocket of that size left Pad 39A.

SpaceX has already achieved a number of aerospace milestones, including the controlled hypersonic descent and landing of several first stage boosters, with the intent of reusing them to lower launch costs. You can monitor their progress at SpaceX.com.

Closer to home, work continues in Mojave on efforts to make affordable space tourism a reality. The Spaceship Company continues to develop and test a new SpaceShipTwo for Virgin Galactic, and is now involved in the development of the Boom XB-1 supersonic demonstrator that is intended to lead to a supersonic passenger airliner that can be flown over land. XCOR is continuing to develop their Lynx suborbital rocket plane and is designing an orbital vehicle.

Over at Edwards Air Force Base, work is progressing on several advanced aeronautics projects to make airliners faster and/or far more fuel efficient.

Here in Tehachapi, the annual Brite Lake Star-B-Que, sponsored by the Antelope Valley Astronomy Club, will be held the weekend of July 22-23. The Tehachapi Airport Star Party will tentatively be held either August 26 or September 23. (Many local astronomers are heading out of town for the total solar eclipse that will sweep across the nation on August 21, including me!)

There is much to keep an eye on in the skies around Tehachapi!

Planet watchers have much to keep them busy.

Those who have been enjoying the dazzling evening light of Venus all winter will have noted her rather rapid "sun dive" as she slipped between the sun and us. Venus has already reappeared low in the morning twilight.

Mercury can be seen in the west at sunset. I often don't mention Mercury because it's usually obscured by the mountains around here. This is a great time to see the smallest of the "full-fledged" planets. Mercury will reach its peak altitude on April first. Look for a bright star low in the west 30 minutes after sunset.

Note that a star that low in the sky should twinkle (scintillate) wildly, because stars that far away are effectively point sources. Planets show a disc (in a telescope or binoculars), so Mercury doesn't twinkle near as much.

Mars is about 15 degrees behind (east of) Mercury. It's on the far side of the sun from us, so not at all at its brightest.

However, Jupiter is in prime position. It will reach opposition (where Jupiter and the sun are on opposite sides of our sky, and Jupiter is at its closest to the earth) on April 7th. Even small telescopes should be able to make out the dark Equatorial Belts, and of course the four Galilean Moons.

Saturn rises around midnight and is best viewed in the hour before morning twilight. The rings are still tilted near their maximum "showoff angle" of 26 degrees. 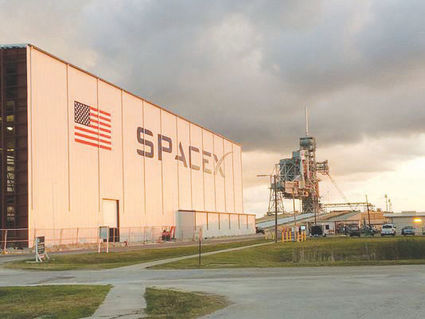 The new SpaceX hanger at historic Launch Complex 39A prepares to re-energize our quest for deep space. Credit: NASA/SpaceX

Comet chasers can watch for periodic comet 41P/Tuttle-Giacobini-Kresak. This comet is known for bright outbursts. If we're lucky, it'll brighten just enough to see with the naked eye as a bit of fuzz. However, it should be a fair binocular target. It'll cross the northern sky from Ursa Major in mid-March to Vega in mid-May. Go to is.gd/4pcometcampaign for a printable finder chart.

Meteor hounds may enjoy the often light, but unpredictable, Lyrid Meteor Shower. This year it is expected to peak on a Saturday morning (April 22nd) during the prime-viewing predawn hours in Tehachapi, with only a thin crescent moon. You couldn't ask for any better conditions for meteor watching!