City Council approves the next step for Event Center 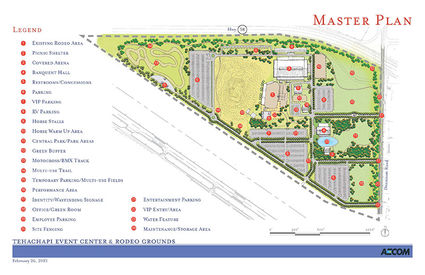 At their Feb. 21 meeting, the Tehachapi City Council approved a plan that could move the City closer to making the Tehachapi Event Center, Rodeo Grounds and Motocross Track a reality. They voted to apply to the FAA to have that part of the airport property removed from federal obligations while keeping it within the City's Airport Enterprise Fund.

The City originally envisioned a motocross track on the airport grounds in 2006. The small triangle of land located north of the airport, west of the Rockpile and adjacent to Highway 58 seemed the perfect location for the track with the rodeo grounds located on the east side of the Rockpile.

In 2012, the City entered into a new lease with the Tehachapi Mountain Rodeo Assn. for long-term operation of the developed rodeo grounds. A Master Plan for the Event Center concept was developed and presented to the Airport Commission. The Event Center plan included other activities like the motocross track and a banquet hall. The commission unanimously approved the lease and concept and the Event Center Oversight Committee was formed.

The final draft of the Event Center Master Plan was unveiled by Greg Garrett and Chris Kirk at the City Council meeting on April 15, 2013 and the Council voted for implementation of the plan. The next step was searching for ways to fund the project. One such way was through the Off-Highway Vehicle Grant Program offered by the State of California and in April 2014 Council approved an application for grant funding from the State of California Department of Parks and Recreation and were awarded the nearly $1million grant. The grant would be funded by Off-Highway Vehicle registration fees. Under the terms of the grant, the City had three years to complete the project. To date, none of the funds have ever been used.

The City spent the rest of the year completing the studies required by the California Environmental Control Act. In early 2015, a CEQA Negative Declaration for the Event Center Master Plan was prepared. It included a determination that the Event Center and Motocross Track would be consistent with the Airport Land Use Compatibility Plan. It detailed studies of traffic, biological resources, archeological resources, and noise studies among other documents. The Neg Dec was sent to the FAA and other agencies in April.

In early 2016 the City requested an interim land lease from the FAA. In April, the FAA received a letter from Kenneth Hetge, saying that the City had already started construction on the project and that they should not approve it. This turned out to be not true; however, the FAA responded by asking for a federal environmental review (NEPA). Completing a NEPA could cost between $100,000 to $200,000 and almost duplicate the CEQA. It most certainly would take longer than the time remaining to use the grant funds.

The council heard from representatives of the horse community, the airport and motocross supporters with positions both pro and con. Other options were considered but all could have resulted with the abandonment of the project. According to Assistant City Manager Chris Kirk, with the FAA obligation removed, the project can move forward and still allow for the financial benefits to the airport. Councilman Phil Smith added, "This is the people's airport" and the Event Center can give residents much more to do.

Charles White from Tehachapi Tourism and Main Street added that Tehachapi is known for its events and an increase of our amenities has been a goal for some time. A large event venue is needed to attract larger groups and it needs to be away from town. Artist Betty French said that there are art related groups that would come here if we had a venue big enough for a commercial art show and the planned banquet space at the Event Center would fill the void. Motocross riders stated that they cannot ride in dust so tracks are sprayed with non-potable water or mixed with a substance to eliminate most dust.

City Council meets are held on the first and third Monday of the month at 6 p.m. at Wells Education Center, 300 S. Robinson. Agenda is available at the City website:

When it has something to discuss, the Planning Commission meets on the second Monday of the month at Wells Education Center, 300 S. Robinson. Check the City website to be sure the meeting will be held.