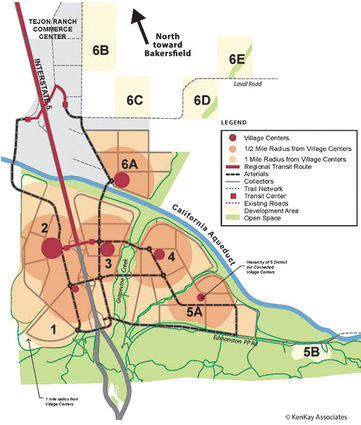 To access information on the Grapevine plan that the supervisors approved Dec. 6, go to the Kern County Planning and Natural Resources Department web site. Under Environmental Document Postings and Updates on the first page, click on Grapevine Specific and Community Plan. The detailed document is 1,016 pages long.

The development, at the southern tip of the San Joaquin Valley, will include the construction of 12,000 residences (or 14,000 depending on future assessment), 5.1 million square feet of commercial and industrial structures, hiking and biking trails, 112 acres of parks, five kindergarten through eighth grade schools, one high school, two fire stations, a sheriff substation and a 6,500-square-foot library or joint-use civic center – all new. Fifty-eight percent of the project, or 4,643 acres, will be designated for residential, commercial and industrial uses; 42 percent, or 3,367 acres, predominately will be grazing land and open space, with no development permitted. Every house will have solar installations for power. The villages within the project are designed to be walkable.

Grapevine is one of three major development areas within Tejon Ranch that have been made possible by an agreement the ranch hammered out with environmental groups in 2007. Under the agreement, Tejon Ranch set aside 90 percent of its pristine 270,000-acre ranch for conservation purposes in return for the ability to develop the other 10 percent unhindered by environmental challenges.

At the Supervisor board meeting, two public speakers spoke against the project and 22 spoke in favor.

J.P. Rose of the Center for Biological Diversity, which was the only major environmental organization that refused to sign the 2007 agreement, called it a "misguided project." He said the development would hinder efforts to combat climate change by adding 200,000 vehicle trips a day and would hasten species extinction.

Kern County Director of Planning and Natural Resources Department Lorelei Oviatt, whose team produced the 1,016-page staff report on the project, countered Rose's argument by pointing out that the project will provide housing for people who work at the Tejon Commerce Center, thereby cutting down on long commutes.

"Where are people going to live in California?" she said. "Where are the jobs going to be? This project meets SB 375 [targeting greenhouse gases] implementation. It is a jobs employment generator and growth center where people can get to their jobs without having to drive."

Julie Solis, who also opposed the project, spoke passionately about the danger of Valley Fever spores in the soil that would be exposed by construction and endanger lives. Oviatt said her staff addressed the Valley Fever matter extensively in their report. They consulted with the health department and established a worker awareness and equipment filter program for construction.