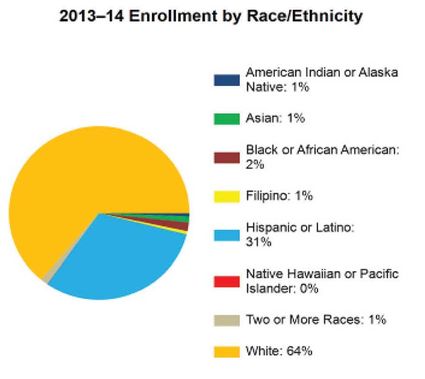 An audible gasp arose from the community leaders at the June 1, 2016 meeting of the Greater Tehachapi Economic Development Council when Tehachapi Unified School District (TUSD) Superintendent Susan Andreas-Bervel pointed out one of the harsh realities of the way California is now funding schools. 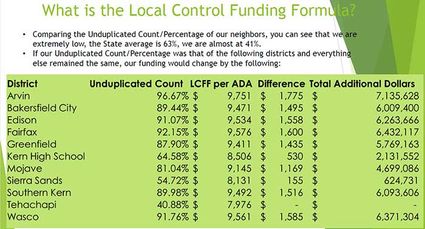 The quest for equity – The second column ("Unduplicated Count") shows the percentage of socio-economically disadvantaged, English learners and foster students in a selection of school districts in Kern County. The right-hand column shows the total extra funding the Tehachapi Unified School District would receive if the Unduplicated count were as high as the selected districts. Sierra Sands Unified School District, located in Indian Wells (serving Ridgecrest, Inyokern and China Lake) is 28/100 of a percent shy of the 55 percent threshold for extra concentration grant funding, but apparently close enough. The list shows 11 of the 47 school districts in Kern County.

Under the formula, which began phasing in during the 2013-2014 school year, school districts with a greater percentage of high-need students receive more money than districts that do not have enough high-need students to qualify for grants above the attendance base grant. If TUSD, with 40.1 percent of its students qualifying, had proportionately the same number of high-need students as Arvin Union School District (96.67 percent), Tehachapi would receive $7.1 million more for the year, she said.

If TUSD had the same proportion of high-need students as Mojave Unified School District (81 percent), it would receive $4.7 million more.

"Tehachapi was not a big winner in this funding formula," she said.

With the new formula, the state has gone all-in to try to narrow the gap between the highest-and lowest-achieving students. Supplementary and concentration grants flow to districts with the threshold 55 percent of English learners, foster children and socio-economically disadvantaged students, the latter determined by enrollment in the free lunch program. Even if a student qualifies in more than one category, the student is counted just once. Students in this group are called "unduplicated." In the TUSD, Tompkins Elementary is inching toward 55 percent unduplicated, at 54 percent, but supplementary funding is based on the district, not on individual schools. 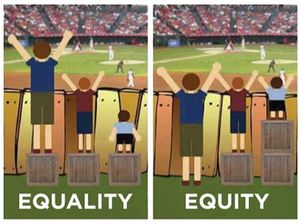 The graphic shown above, featured in Tehachapi Unified School District Superintendent Susan Andreas-Bervel’s presentation, has become an iconic representation of the political and social philosophy at the heart of the California school funding reform. The premise is that equality (every child gets the same size box) creates inequality (the little one still cannot see the ball game), and equity – meaning social justice – can be achieved only when the little one receives more of the available resources. Hence school districts in Kern County with qualifying demographics receive millions more in state funding than Tehachapi Unified School District, whose proportion of English learners, foster children and socio-economically disadvantaged students does not meet the 55 percent threshold for extra concentration grant funding.

Forde Files went down a rabbit hole to find the source of the graphic. The City of Portland Office of Equity and Human Rights adapted the above version from the original, apparently from this website: indianfunnypicture.com/img/2013/01/Equality-Doesnt-Means-Justice-Facebook-Pics.jpg [sic]. On the website of the Sewall Foundation, based in Maine, the image is shown with this additional wording: “Equality = Sameness. Giving everyone the same thing – It only works if everyone starts from the same place. Equity = Fairness. Access to the same opportunities – We must first ensure equity before we can enjoy equality.”

The version below, featuring youngsters of color, is from the Interaction Institute for Social Change, by Angus Maguire.

According to comments online, the graphic raises myriad questions ranging from “Why couldn’t they buy tickets?“ to “Did the tall student (or dad) willingly share his box?” to “Should higher-performing students get less time and attention from teachers?“