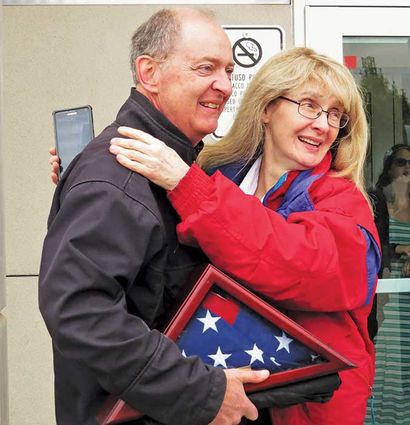 Ed and Sharon Weaver at the ceremony.

On May 22, 2016, a flag lowering was held for the retirement of Ed Weaver, Tehachapi High School's beloved wood shop and drafting teacher. Many people gathered at the front of the school to honor Mr. Weaver, including Superintendent Susan Andreas-Bervel, local boy scouts, and the THS Warrior Band. Principal Scott Heitman gave a speech, to commemorate Weaver's 30 years at Tehachapi High School.

Ed Weaver began his teaching career in 1978 at North Summit High School in Coalville, Utah. After that came five years at Bamberg American High School in Bavaria, Germany. Weaver came to Tehachapi High School in 1986 to teach drafting, electronics, and basic math. These subjects were honed down to drafting, electronics, and, thanks to a remodeling at THS, wood shop. The wood shop was an excellent opportunity for Mr. Weaver, who is considered a fine craftsman among his colleagues. As Mr. Heitman put it, "He can make anything, with the right tools. And if he doesn't have the right tools, he'll just make them himself." Every teacher knows him by the handmade doorstops he provides for each classroom, know as "Weaver's Wedgies".

Mr. Weaver is known to have a highly positive teaching style, utilizing his seemingly endless patience often, and coming up with witty one-liners to diffuse potentially explosive situations. He challenged his students frequently, whether it was a challenge to try their hand at civic service, or a friendly strength competition to see if anyone could do a one-handed overhead press with a 44-pound chunk of railroad track. None but Weaver could ever accomplish the latter. Teachers and students alike know him for his easygoing sense of humor and persistent kindness toward all people. It is not uncommon for Ed Weaver to run into former students around town, many of whom apologize for their immature behavior in his class, and thank him for putting up with them.

Outside of teaching, Ed Weaver has lead a busy and productive life. He coached the track team for a few years, taking them to CIF championships. He encouraged students to engage in community service with "Be a man, crush a can", the slogan for the recycling program at THS. He has been active in leadership for several boy scout troops, and mentored many successful Eagle Scout candidates. Just last summer, he helped to organize a group of 30 teenage boys to go on a 250 mile bike ride up the California coast.

At the closing of Mr. Heitman's speech, three boy scouts lowered the American flag in honor of Ed Weaver's 30 years at Tehachapi High School. He was given the folded and framed flag as a gift of appreciation. Weaver and his colleagues then retreated inside for a special cake, as well as coffee and other desserts. A card was passed around and signed, and about a hundred photos were taken of Weaver with his fellow teachers. Friends told stories and wished Mr. Weaver luck in this next chapter of life. Ed Weaver has left a legacy of excellent teaching practices behind as he looks forward to his retirement.