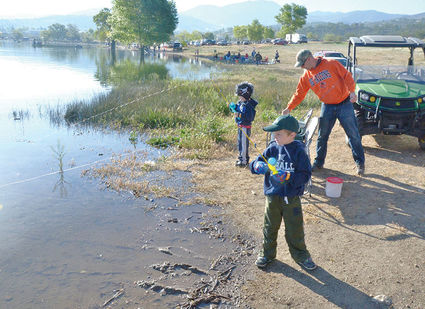 Two young anglers, Nolan and Ethan, with their dad Tony

I had the pleasure of experiencing a fishing derby for the first time in my life! I must admit that I am NOT a morning person, but I think I'm going to convert. The Tehachapi mountains are glorious as the sun rises!

I poured my coffee, grabbed my note pad and headed for Brite Lake. My daughter Blanca and her friend Elise were happy to accompany me. The first thing they noticed upon arrival was the booth set up by the Stallion Springs 4-H Club! They had doughnuts, hot chocolate and coffee with great prices!

I then chatted with TVRP supervisor LeAnn Williams who showed me all the incredible prizes and sponsors. Prizes were donated by Chop Shop, Grandma's Candy House, Tractor Supply, Albertson's, and Gary Yamamoto. There were rods, reals, bait, tackle, candy, basketball hoops, hair cuts, annual lake passes and much more! Parks & Rec donated a $500 paddle boat for the raffle grand prize! A huge "Thank You" to Benz for bringing much needed porta potties! Albertsons even had delicious tri-tip sandwiches for sale.

I wandered down to the lake and could not help but notice the calm water and the refreshing air that lingered all around. The day was beautiful and I felt myself becoming more interested in fishing with each step I took. So many families were lined up quietly around the shore with poles in the water. So many people, yet such silence. It really was divine!

I was told that Brite Lake had been stocked with 1,000 pounds of rainbow trout farmed from Nebraska! The competition began at 7 a.m. and by 7:02 a seven year old girl named Mahkyla Hernandez had already caught a 2.88 lb trout! Little did she know that she would be taking home the 1st prize for biggest fish caught (kid category)! Her smile was infectious and her Mom was the proudest woman at the lake!

I met some beautiful families and learned much about fishing! The first family I met was Tony with his two sons Nolan (6) and Ethan (4). Nolan was quick to let me know that he is the oldest and he was dead set on winning one of those basketball hoops (donated by Albertsons). Tony told me this was their first year, but they will be back again!

The next family I met was a large family from Van Nuys who have been coming to Brite Lake for 14 years! Christina did the talking and she is full of life and excitement for fishing! They also, go to Mammoth and Big Bear for fishing competitions. Their grandfather actually ended up winning 1st place for biggest fish (adult category pictured).

Brite Lake acts as a storage lake for Tehachapi. The water level was so high that anglers wishing to use the floating dock had to recruit a boat to get them on and off the dock.

It is a beautiful thing to see hundreds of people from different backgrounds come together for the love of fishing! As the competition came to an end, large groups of people headed up to weigh in and the air was buzzing with anticipation. Albertson's tri-tip sandwiches sold out just in the nick of time and people were collecting their prizes. Joshua Kachirsk (11) was the only kid to qualify for the five stringer prize and he couldn't be happier!

There was a $250 cash prize for a tagged fish caught and I'm told there are still a few out there. If anyone catches a tagged fish by the end of May then a prize will be given (not cash). All you have to do is bring the tag (not the fish) to Tehachapi Valley Recreation and Parks District office to claim your prize.

This experience was another reason I love living here and I am absolutely joining the competition next year with our five daughters!

3rd – Danica Skinner, weighing .22 lbs. (However received after the close of official weighing.)

1st – Richard Townsend, who turned in the only 5-string with collective weight of 8.04lbs

2nd – Michael Boutte, collective weight of 1.94lbs. for 3 string only.

The remaining tagged fish caught through May 30 can still be turned into TVRPD (tag only, not the fish) to receive a prize in place of cash money.

A raffle was held following the weighing and numberous prizes were awarded, including a paddleboat which was won by Kahuna Navarro.