By Tina Fisher Cunningham
The Forde Files No 76

An OSHPD (Office of Statewide Health Planning and Development) building at the Tehachapi Replacement Acute Care Hospital on July 31, 2014.

With a new Inspector of Record (IOR) and new concrete contractor on site, construction on Tehachapi Replacement Acute Care Hospital came roaring back to life the week of July 28 after a several-month slowdown. The construction office bustled with contractors and supervisors poring over plans as new materials appeared throughout the site. 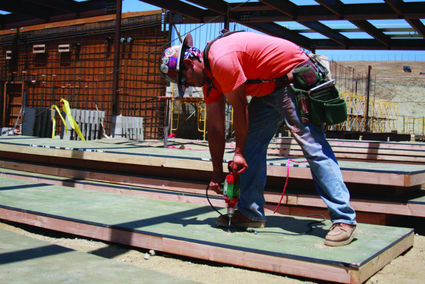 "It's been an interesting month," Project Manager Stacey Pray told the Tehachapi Valley Healthcare District Board of Directors on July 30. "We will be getting a new schedule from Bernards/Colombo [construction managers] next week." During the slowdown, in the absence of an OSHPD (Office of Statewide Health Planning and Development) inspector, work continued on non-OSHPD parts of the project – Magellan and Challenger roads and the administration and support buildings (OSHPD buildings are those that house patients).

Seventeen million of the $87-million project has been spent, Pray said.

Chief Financial Officer Chet Beedle reported to the board that the district has $97.9 million in total assets. In his fiscal year financial report, Beedle said that expenditure in the category of Charity Care has dropped to $2,016 from $18,513 in 2013 ("Almost gone," he said) because people have insurance with the expansion of Medi-Cal and Covered California.