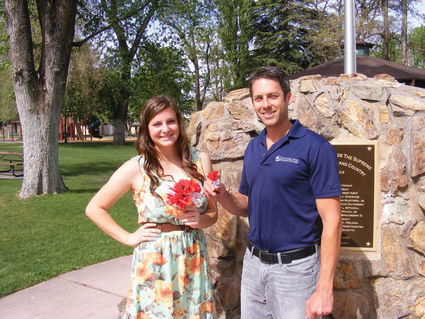 Brooke Sasia, popular Tehachapi High School Junior and the 2014 Delegate to Girls State, was on hand to present the first Poppy to Matthew Young, District Manager of Tehachapi Valley Recreation and Parks District. A carefully thought out setting for the picture was in front of the veterans Memorial Monument in Philip Marx Central Park.

The date for presenting the poppies to the public will be May 11 through 17. For ninety three years the ALA has sponsored "Poppy Days" nationwide to remind America of the men and women in the Military, living and dead, who have served their country. The red crepe paper poppy, handmade by the veterans themselves, was officially adopted in 1921 as the memorial flower of the American Legion and the Auxiliary. It was inspired by the red poppies which once grew on the battlefields of Flanders and is a perpetual memorial to the brave men who fought there and on all other battlefields throughout the years.

It is fitting and proper that the citizenry pay tribute to our nations' honored dead as well as those who have served in the Military and who are presently on active duty in the service of our country. The American Legion and the Auxiliary are very grateful for the community support that has always been extended to them on the one week each year the poppies are offered.