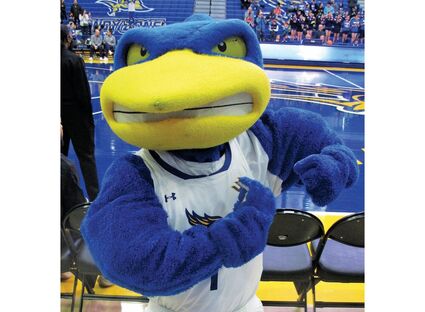 For as long as I can remember I've been a basketball fan, particularly of the girls' and women's game as I was a player myself. So, after many years of living here in Tehachapi and only watching college and pro games on TV, I decided to make a trip down to California State University in Bakersfield to watch a Roadrunner game.

My friend Julee – who is generally and happily "up for anything" – went with me last Saturday to watch the Roadrunners play the UC Davis Aggies. Not having been there before we didn't know what to expect but it seemed like a fine idea for a winter's afternoon day trip.

It was! First we stopped at the Keene Café in Keene for a yummy lunch (I highly recommend this place whenever you have time for breakfast or lunch on your trips down the hill), then on to Baks we went. In spite of the Ming exit off the 99 being closed, we found our way to the campus and the parking lot for the Icardo Center (it was easy to find off Camino Media, behind the Marketplace's Edwards Regal Cinemas, and parking was plentiful and close by the center).

We had no idea what seating might be like but that turned out to be easy too – it was all general admission so we could pick our seats once we got inside the gym and checked out the possibilities. There was a nice crowd there but it was far from full and we had our choice of great seats. We could have sat courtside but opted instead for second row up in the padded seats (still close enough to feel like we were right at the edge of the action).

Anyway, we had fun watching the game and everything else going on around us. As is true of many sporting events, part of the fun is watching not only the teams and coaches and the game but also the cheerleaders, the pep band, other fans, and of course the mascot. Rowdy the Roadrunner came by and posed for a picture and then gave me a fist bump; many of the half-time performers sat around where we were sitting. Cheerleaders made several passes by us, and there were some very vocal and loyal Roadrunner fans sitting behind us.

About the game itself, unfortunately the Lady Roadrunners lost to the Aggies, 60-43, but it was a better and closer game than the score might indicate. I'm just really happy that these young women have the chance to play at the level they do, and that they are supported by so many fans and spectators.

If you go to a women's game, general admission is $9 and you can sit anywhere (both the men's and the women's teams play at the Icardo Center but I don't know if the prices are the same for the men's games, or if the experience of seat choices are the same). Behind the team seats and announcer/timer tables are bleacher seats; the other side has seats that are padded on both the back and the seat (with cup-holder dividers). Courtside padded folding chairs are also available. There is a snack bar for snacks and drinks. The whole place is wheelchair accessible.

I'm not going to try to give you driving instructions as there is still a lot of roadwork going on in Bakersfield. I will note that the CSUB campus is located between Ming Avenue on the south (behind Kaiser and Haggin Oaks Marketplace), Stockdale on the north, Old River Road on the west and Gosford on the east. To get to the Icardo Center, take Camino Media west from Gosford, and turn into the campus on Roadrunner Drive. That will take you right to the center and free parking.

Lots of fast action in the CSUB vs UCD game last week.

You can always check the CSUB website for dates and times for both men's and women's games (search Cal State Bakersfield basketball). If you go, have fun, and be sure to root for the Roadrunners!