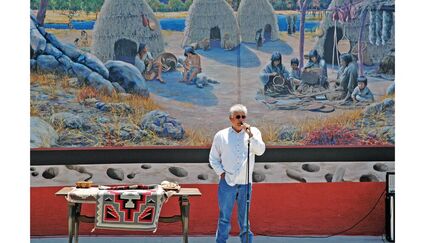 Harold Williams in front of the Nuwä mural on F St. during dedication ceremonies. His ancestors are depicted in the mural behind him.

If you want to learn more about the Native Americans of the Tehachapi Mountains, the first two things to do are this: visit the Tehachapi Museum, and also pick up a book called Handbook of the Kawaiisu. This unique book was a life accomplishment of a remarkable Nuwä elder named Harold Williams.

Harold was a leading tribal member of the Nuwä, the Tehachapi Indian people, and he realized a longtime dream with the 2009 publication of Handbook of the Kawaiisu, a book he co-authored with archeologist Allen Gold.

There was a team who worked on the Handbook of the Kawaiisu, and we held monthly and eventually weekly meetings to get the job completed. I was honored to help compose the material into book form, with help from my Tehachapi sister/friend Kerri Esten. Others included Del Troy, Janice Williams, Julie Turner Girado, Mark Faull, Charles White, Phil Wyman and more.

But it was Harold, who had served as tribal chair of the Kern Valley Indian Community, who was the main driving force. He was universally liked and respected, and we all worked together to help him complete his goal. Harold drew his inspiration for the book from the Itabüm, the Oldtimers, who had preceded him, and he emphasized that he didn't want the spotlight on him, or any other contemporary people. Harold wanted the Handbook of the Kawaiisu to focus on those people who lived through the transition from traditional ways to modernity.

Harold was born on November 12, 1947 to Ed and Clara Williams, both of whom were fluent Nüwa speakers. The family lived at Keene when Harold was very small, because Ed and some other Indian men worked at a small sawmill there. Harold contracted polio when he was only a few years old, but he was able to recover, though he felt the effects throughout his life.

Harold's best friend and playmate was his older brother Bobby, but when Harold was five and Bobby was seven, Bobby died from rheumatic heart fever. It was a grievous loss for the family, and it left Harold as the oldest child. He assumed a leadership role that became part of his being, and he served as a kind of additional parent for his siblings that followed: Janice, Theresa, Emily, Ronnie and Valerie.

Harold grew into a strong boy with broad shoulders, and he was working like a man when he was only 13 years old. He would often work on fencing crews for rancher Sam Cuddeback, digging post holes, driving T-posts, hauling rolls of wire. He got paid and used his money to contribute to the family, buying milk and meat to help feed his parents and siblings.

All through his teenage years Harold worked like that, and anyone who ever hired him got a hard-working, honest and reliable man. Harold loved music, and when he was still a teenager he started playing guitar. He was mostly self-taught, with some instruction from his Indian cousins Bruce Butterbredt and Luther Girado, and together they played country, oldtime and a little rock and roll.

After he graduated from Tehachapi High in 1966, Harold went to work at the Monolith Portland Cement Plant, where his father also worked. He was a young man, and had to prove himself to older employees. "They'd break you if you weren't tough," Harold once told me. "They weren't really mean, but they'd give you a hard time and you had to earn acceptance."

Harold briefly worked for a roofing company in Los Angeles, and later had his own tree trimming business called Williams Tree Service. He married Brenda Newton of Lamont in 1968, and they had two boys, Sonny and Lucas.

In 1981, Harold and Brenda built a house on Indian allotment land on Piute Mountain. The home is off the grid, and Harold hauled all the materials up there himself. Not long after that, he went to work at CCI in Cummings Valley.

Harold started as a correctional officer, but didn't like it much. "The inmates mistook kindness for weakness, and they tried to exploit that," Harold explained to me. "I had to learn their ways." It seems ironic to me that anyone would mistake a man who started building fences in the deserts of California and Nevada when he was only 13 years old, and gave most of his money to his family, as a weak person, but those inmates didn't know how truly physically and mentally tough Harold Williams was.

Harold was soon able to transition into "free staff" as a groundskeeper, which was much better suited for his temperament. He had as many as 640 to 1,000 inmates under his direction, taking care of the landscaping on the prison grounds. He retired after 20 years at CCI.

After years of living in Tehachapi, Harold and Brenda moved back up to the house on Piute Mountain in 2002, and completed an addition to make the home bigger. It is in a beautiful location, nestled in among an enormous Grey Pine near Setimo Creek, which is named for Harold's great-grandfather Setimo Girado.

As is often the case, Harold was afflicted by post-polio syndrome more than 50 years after he initially got polio, and this affected his mobility. In recent years he was forced to use a cane or walker to help avoid falls.

Some of Harold's co-workers and other friends referred to him as "Chief," which can be a meaningless nickname for any man of Indian descent, but in Harold's case, it was appropriate because he was a leader. He was a thoughtful, philosophical man who had spent lots of alone time, pondering the deeper questions of life.

He possessed an innate dignity as well, and he was an incredibly gracious and well-mannered person. He tried to treat everyone with respect, and he expected it in return. He would not be pressured into fulfilling anyone else's thoughts on how he should live his life, and he would say "I'm not your token Indian" if he felt himself being manipulated. 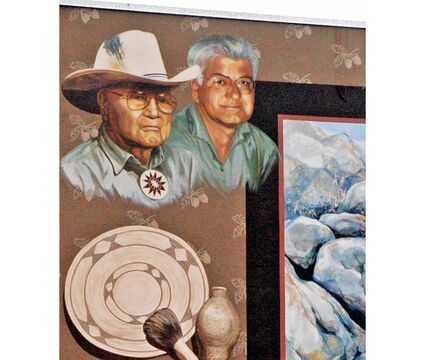 Harold is featured on the F St. mural (right) along with Nuwä elder Andy Greene.

It was my great honor to be close to Harold Williams. Our birthdays were only a few days apart and I called him "Pavin," (pronounced pa-veen) which means "my older brother," and I learned about life and the Itabüm from him. Friendship with Harold Wiliams was a gift of great price.

The world lost a unique man when Harold Williams passed away from a heart attack at the age of 70 in 2018, but through the examples he set and the book he published, he has left us a memorable legacy.