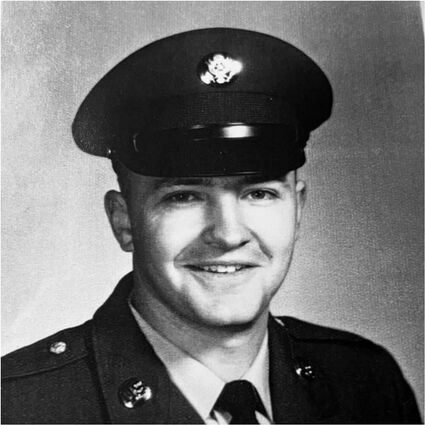 Dennis Lee Kelly, a resident of Hart Flat, California passed away on Nov. 27 at the age of 79. He was receiving treatment at the Bakersfield Memorial Hospital and surrounded by family at the time of his passing.

Services were held on Dec. 9, at the Bakersfield National Cemetery in Arvin, California, officiated by a military Chaplain. Private interment followed at the cemetery.

Dennis was born in Fresno, California on May 27, 1943, the first son of Donald and Virginia Kelly. According to his mom and aunts, he was quite the showman as a child, and he carried that "charm" through his teen years and into his adult life. Dennis loved baseball which he played in high school, and he was a huge Angels fan. He graduated from Roosevelt High School in 1961 and attended Fresno Community College before volunteering to join the U.S. Army. Dennis always had a fervent desire to serve his country and he proudly served several tours of duty, initially in Germany and eventually in Vietnam where he flew with the medevac core, recovering and treating wounded infantrymen. Upon leaving the military in the late 1960s, Dennis worked in retail sales but eventually joined Appleby & Company and began his career as a Workers Comp Fraud Investigator. He retired in 2008.

Dennis married his first wife, Linda, who died in an automobile accident in 1971. He subsequently married Jeanie with whom he had his son, Justin, and stepson, Brant. After that marriage ended, Dennis married Teri in 1984, and together they had their son, Cody. Dennis is survived by his wife, Teri; son, Cody, and daughter-in-law, Cory; sons, Justin, and Brant; granddaughter, Denee; brother, Jim, and his wife, Gail; nieces, Shannon, Jamie, Kimberly, and Darcie; and their ten children, all of whom adored their "Uncle Dennis."

Together with Teri and Cody, Dennis enjoyed and spent most of his later life on their 25-acre ranch in Hart Flat complete with his horses, dogs (so many dogs), and a wide variety of other farmyard critters including a donkey, cows, bull, etc. Memorial Day weekend gatherings at that ranch are some of the most treasured memories of his extended family. When our phone calls to Dennis went to voicemail, his message always started with," I'm out riding" which is where he most always wanted to be.

Dennis was a patriotic soul, reflecting the era in which he grew up and not patient at all with what he perceived to be the current direction of our nation. He loved his country and has always been an ardent supporter of the men and women of our armed forces and was rarely seen not wearing apparel that remembered, and reminded others of, POW/MIA armed service members. He cared deeply for them even though he did not know them personally.

Donations may be made in remembrance of Dennis to the Wounded Warrior Project.

Thank you, Dennis, husband, father, grandfather, brother and uncle for your service to our country and your love for your family.