In years when the water returns 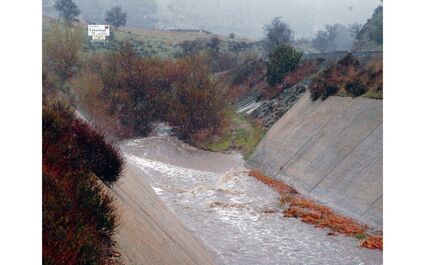 The Tehachapi Creek Streamflow Gauge, located a mile or so down the canyon towards Bakersfield, is swollen with frothy runoff even as the storm continues.

One of the ways that I know California has been locked in an ongoing drought is that fact that I often dream about a winter and spring that are green and lush and verdant. It can seem hard to imagine now, but there are years when the Tehachapi Mountains are home to lots of seasonal creeks that are flowing with water, beautiful water. . . .

The year 2011 was one of those years, when the rains and snows kept coming, recharging reservoirs, springs and aquifers. It seems so long ago now, but I remember it well. And have the photos to prove it happened.

In a land where the summer dry season can last for five or six months, the return of water is no small matter. The first storm or two of autumn, which happily we've already had this year, begins the renewal process, germinating seeds that lie dormant in the dry soil.

Dust gets settled, grass starts greening again and the evergreen trees and shrubs are rejuvenated, both cleansed and watered by soaking rain. The two storms we had earlier this autumn have started that process of seasonal renewal. I just hope (though the odds are against it, I know) that storms will continue.

In the years when winter storms do continue and increase in strength and moisture content, then the seasonal creek begin to awaken. Water courses that had long been empty and dry come to life with rain and snowmelt.

The bigger ones, whose upper reaches sometimes run year-round, including Tehachapi Creek, Brite Creek, Caliente Creek, Sycamore Creek and Oak Creek, can surge and even roar in the aftermath of a big storm. They can become an order of magnitude larger than normal. On a number of occasions, for example, I've seen the driveway into La Paz (the National Chavez Center) be rendered completely impassable by the surging waters of Tehachapi Creek during and immediately following a large storm.

The invigorated streams speed past their banks, carrying muddy runoff, fine silt and debris, and occasionally toppling the willows, cottonwoods and sycamores that grow in and among the creekbeds. Many of these riparian trees have died during past few years' prolonged drought, and lots of dead trunks, limbs and brush will be sent downstream when we finally get some big storms again.

When water returns, the once-silent arroyos and canyons will hum and sing again with the sounds of the water symphony. In a wet year, these little creeks get prettier as spring arrives. They flow through a lush and verdant landscape, surrounded by green grass and budding trees.

Miner's lettuce, buttercups, lupines, baby blue eyes and other flowers are sprinkled along the banks, while watercress grows right in the chuckling little streams. The light brown, foamy storm runoff is replaced by clean, glistening snowmelt, both cold and clear.

With the racing, impatient storm water gone, the creeks flow more unhurriedly over and around rocks and boulders, sparkling on sunbright days and forming small pools that reflect the sky overhead.

Abundant rain and snow also recharges the springs that will feed the rivulets and creeks even when all the snowmelt is gone. When the springs and artesian wells awaken from their slumber, which in many cases has lasted for years now, they begin to release moisture at a slow and measured rate well into summer.

The small lakes and ponds that decorate the Tehachapi Mountains here and there, like little blue gems when seen from above, are also renewed during a wet year. Water fills them and reaches all their banks. Pacific Chorus Frogs signal their gratitude at night with a happy amphibian chorus.

I know that these descriptions of wet years sound like some kind of fever dream, but longtime residents have seen this happen many times. Just not very often in the past 10 to 15 years. But it happened more frequently in the past, and I know it will eventually happen again. 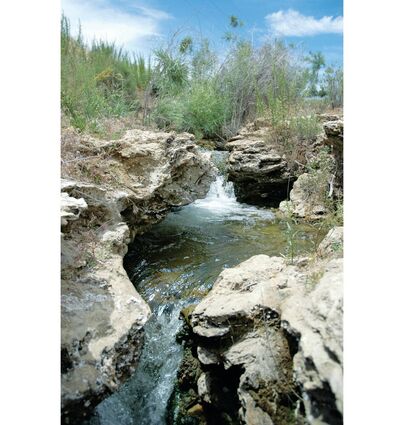 Oak Creek, which crosses underneath Tehachapi-Willow Springs Road by Oak Creek Road, is shown flowing strongly during a wet year.

I'm including photos I've taken during some of these wet seasons, when the water did return to nourish a thirsty land. Enjoy these photos of a wetter time, and join me in hoping that we experience them again soon. If not this year, then perhaps next year. Let the silent creeks be reborn again.