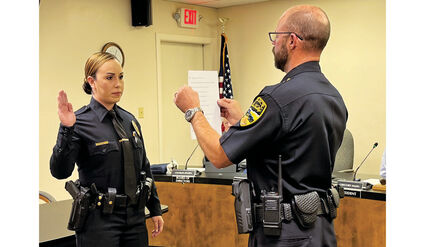 On Nov. 10, a large crowd gathered at the CSD meeting to welcome our newest member of the BVPD. Chief Dan Suttles swore in Imelda Rizo, our first woman on the force.

She spent most of her childhood in California City, and graduated from Mojave High School. She knew from an early age that she wanted to work in law enforcement. Originally, she was assigned to Los Angeles County's maximum security jail. She spent almost 15 years with LASD. She was promoted to Senior Deputy and oversaw a unit that housed anywhere from 1,000 to 4,000 inmates. Her main passion though was to work as a child abuse investigator.

Officer Rizo recently relocated her family to the Tehachapi area. She wanted to work with a hometown police department. Our force is fortunate to have her aboard.

An award was presented by outgoing President Greg Hahn to Anya Norton for her service to our community. She spent tremendous time and energy beautifying the water-wise garden by painting the signs. As well, she is in charge of our hot air balloons on July 4 and is dedicated to wildlife preservation.

While we are talking about the water-wise garden, I want to give a shout-out to Kim and Fred Bittner, as well as Carolyn Moranda and Tammy Reich for their dedicated hours to the garden.

The Veteran's Memorial at Cub Lake was a busy site on Nov. 11. Four honorees have reported to their final duty station. Immediate past Commander, Martin Hernandez presented the honorary rose to family members of the following veterans:

Bear Valley Springs is a private gated community in which the residents pay an annual association amenities fee. To visit, a non-member or non-resident must arrange with a friend or family member in the community for a guest pass that would permit them to engage in the activities. Guest passes will be checked.