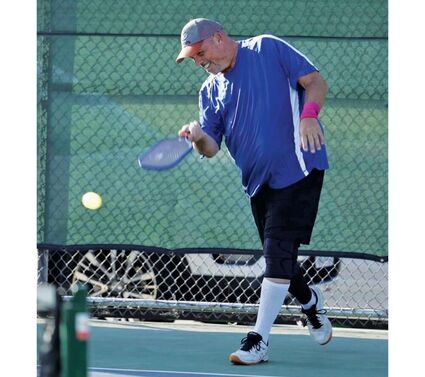 The Loop newspaper has asked me to share some pickleball highlights from the past year and for future events, as interest in pickleball is growing rapidly across the country.

Pickleball in Tehachapi is gaining momentum with players of all ages in leagues and tournaments. Tehachapi pickleball play can be found in Stallion Springs, at Tehachapi Church of Jesus Christ of Latter-day Saints and in Bear Valley Springs.

BVS started its first organized league play in the Spring and it quickly filled with nine teams, followed by a Summer league of 10 teams and finally, a nine team Fall league. The teams were made up of one female and one male player, or all female teams. The competition in league play has created a path for several players to test themselves in tournaments around California, Nevada and Arizona.

Recent medalists from some of these tournaments include Gold medals for Allan Clarkson in mens singles, Veronica Clarkson in women's doubles, Chris and Key Budge in mixed doubles (twice).

If you haven't seen pickleball (yet), you will soon as it is now being featured on CBS Sports, the Tennis Channel and live streaming venues.

A quick trip to YouTube, Facebook, or TikTok and you will find plenty of quick paced videos to watch the sport at its highest level of play. There is a pro pickleball tour and has many celebrities playing the sport as well.

Pickleball provides a cardio workout without high impact and is enjoyable for all ages.