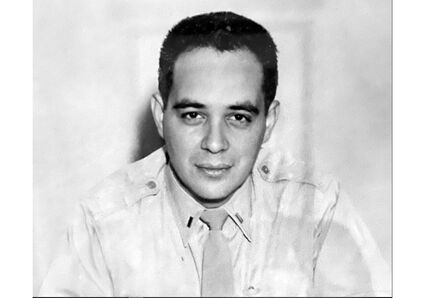 Surrounded by his family... C.J. "Chuck" Villalobos, 92, crossed over to be with our Heavenly Father on Oct. 9 at his home in Tehachapi.

He was born April 15, 1930, in San Francisco, California. He was brought into this world by his father, Alvaro Portillo-Villalobos, and mother, Bertha Porras. Though born in the depression era, he came from an industrious family that resided in the Hills of Brisbane, California. Proud of his Spanish heritage, he lived an enriched life imparting that pride to his family.

Growing up in the city allowed him to explore areas of interest, such as music and various sports. As a child, he studied the violin. As his musical interests grew, he found his true passion as a trumpet player. He joined the musician's union at age 16 and played in several bands during the swing era. His favorite genre included big band swing and mariachi music. During high school, Chuck was a stellar football player and played positions such as a wide receiver and kick returner. Also, during his youth, he excelled in the sport of boxing and trained extensively with the elite boxers during that era. As a result, he never lost a fight and was a renowned Golden Gloves Champion in 1947 and 1948.

During World War II, and at the age of 14 years old, he enlisted in the California National Guard, as many young men did throughout this time. Although he was underage, his patriotic spirit allowed him to join the military and defend his country. The Senior Officers permitted him to train with his respective division and become the driver for the commanding officers. His military duties also included guarding the California North Bay Beaches in San Francisco. His miliary experiences prepared him for his later career working within the California Department of Corrections and Rehabilitation. He started as a Correctional Officer in San Quinten and began his journey to help incarcerated individuals.

He worked a variety of positions within the Department of Corrections throughout California. Simultaneously, while working full-time he earned his degree in Sociology and became an Adjunct Professor of Management at Bakersfield College. He worked with dedication within the Department of Corrections for 35 years and retired as a Prison "Warden" Superintendent for the California Correctional Institution in Tehachapi.

C.J. "Chuck" was married to Charlotte (Leiva) Villalobos for 70 wonderful years! Although they married young, their relationship was truly love at first sight. Chuck and Charlotte mentioned that they were told by naysayers, "you are too young, and it will never last." They have been inseparable ever since. They were a hardworking team and very active in raising their three children. Together they set their goals and built an empire of successes all while raising their family. As education was an integral part of the family dynamic, Chuck took great pride in raising what he considered "three successful children," all who were university graduates and would later go on to raise their own families. Chuck and his wife Charlotte supported each other in every aspect throughout their lives.

Chuck lived a very active life and had much drive and enthusiasm for his hobbies such as football, fishing, camping, backpacking and family. He enjoyed traveling with his wife Charlotte and the simple quiet life filled with gardening and feeding the wild critters that would visit their country home on a daily basis. He was an avid animal lover and had many fond experiences with all his pets and most of all his basset hound... Hercules.

Chuck will be missed but, his legacy will be carried in perpetuity by his family for generations to come... Preceding him in death, he will be peacefully reunited in Heaven with his beautiful wife, Charlotte Villalobos; daughter, Karyn Villalobos; adored grandson, Joshua Villalobos; his loving mother and father, Alvaro and Bertha Villalobos; and sister, Elenore Barela, and nephew, Bob Barela.