Series: Air and Space Port - then and now | Story 3 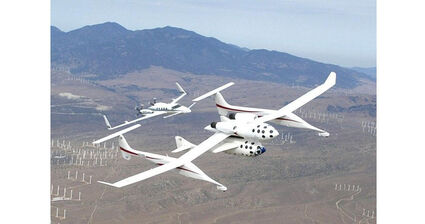 I began this series of articles by telling you that Mojave Air & Space Port District at Rutan Field is celebrating 50 years of success this year. This airport was built in 1935 by Kern County to help the local gold mine transport the gold ore to Sacramento for processing. It began life as a small dirt strip, until 1942 when General William J. Fox, USMC selected the field as a Marine Corps Air Station.

Part two told how the airport district was formed in 1972, when Dan Sabovich was the General Manager and about many of the businesses that were established at the airport, including Scaled Composites founded by Burt Rutan in 1982.

And now on to part three: The aircraft and successes made at the Mojave Air & Space Port.

On Aug. 29, 1983, less than a year after the founding of Scaled Composites, Burt's brother, Dick Rutan, piloted the Starship prototype.  Beech Management flew into Mojave from Wichita Kansas to witness the first flight of the airplane they hoped would replace their King Air.

Fast forward to July 2003, an unexpected visitor came to Mojave Airport. Rob Scherer, owner/pilot of Serial Number 51 Starship I taxied his aircraft to Scaled Composites, shut down the engines, walked around to the front office of Scaled and said, "I understand that Burt Rutan has never had a ride in a production model Starship and if he is interested, I have one sitting out on the ramp."

Not only did Burt fly with Scherer that day, but all the White Knight/Space Ship One pilots went along, as well, including: Mike Melvill, Pete Siebold, Brian Bennie and Doug Shane. They were all smiles when they landed. Burt then asked Scherer if he would fly chase on all of the SpaceShipOne launches.

ASB Avionics, Inc. an FAA certificated repair station since 1991, is a family-owned and -operated business based at Mojave Air & Space Port.

ASB provides avionics modernization system design/build/installation services and equipment for aircraft ranging from Cessna 172s to Boeing 747s with its business balanced among general and business aviation and upgrading antiquated avionics with state-of-the-art equipment on large aircraft. A recent focus across all classes of aircraft has been ADS-B and "2020" compliance and CNS/ATN "glass cockpit" upgrades.

Duane McNutt, ASB Avionics' founder and president, joined the Navy after high school where he was a flight radioman serving on Lockheed Constellations ("Super Connies") in the VVW 1 & 3 Squadron in Quam. After his Navy service, he worked for 20 years as an avionics tech for Aero Equipment in Van Nuys, California. Following a 4-year aviation stint in Alaska, he moved to Santa Barbara, California, to work for Tracor Aviation as avionics manager/technician.

In 1990, McNutt opened his own business as Avionics of Santa Barbara (ASB), and later opened a second facility at the Mojave Air & Space Port (KMHV) in 1994, constructed a huge insulated hangar and changed the company name to ASB Avionics, Inc.

Rotary Rocket, Orbital Sciences and Scaled Composites had the first space programs at Mojave Airport when Dan Sabovich was still general manager. In 1996, Rotary Rocket Company was formed by Bevin McKinney and Gary Hudson with funding from billionaire Walt Anderson, a telecommunications entrepreneur, investor and advocate for commercial space travel and Tom Clancy, famous espionage novelist. Clancy put up $1 million for the project.

The full size, 63-foot tall, Atmospheric Test Vehicle (ATV) was built under contract by Scaled Composites for use in hover flight tests with helicopter blades that had rocket engines on the tips. The rotor head was salvaged from a Sikorsky S-58 helicopter. The ATV was rolled out of its Mojave hangar on March 1, 1999, bearing an FAA registry of N990RR at an impressive gala ceremony.

XCOR Aerospace was a spinoff of Rotary Rocket. Founded by four former employees of Rotary Rocket Company in 1999 after that company, which was developing a reusable launch vehicle called Roton, changed propulsion systems and closed the business.

XCOR developed a number of engines, including versions flown on a modified Long-EZ airplane called EZ-Rocket with Dick Rutan as pilot, who set a world record on December 3, 2005. The point-to-point distance record for a ground-launched, rocket-powered aircraft, flying 16 kilometers from Mojave Airport to California City Airport was also the first official delivery of U.S. Mail by a rocket-powered aircraft. Rutan was awarded the Louis Bleriot Medal in recognition of this achievement.

XCOR is best known in the industry for Lynx, a suborbital space plane announced in 2008, designed to carry one pilot and one spaceflight participant. The vehicle was designed to take off from a runway under rocket power and fly a suborbital arc, gliding back to a runway landing.

In 2015, Xcor moved its headquarters from Mojave to Midland, Texas. In 2014, they suspended construction on the Lynx space plane and laid off 50 to 60 employees - about half the company's workforce. Over the summer, the company filed Chapter 7 bankruptcy in 2017.

"Stargazer" is an L-1011 commercial transport aircraft, formerly with Air Canada, modified to serve as the launch platform for Orbital's air-launched Pegasus rocket, as well as a platform for airborne research projects.

This L-1011 has been used to launch 36 Pegasus rockets as well as the captive carry flights of the X-34 reusable launch vehicle demonstrator.

The three-stage Pegasus is used to deploy small satellites weighing up to 1,000 pounds into low-Earth orbit. Pegasus is carried aloft by the "Stargazer" L-1011 aircraft to approximately 40,000 feet over open-ocean, where it is released and free-falls five seconds before igniting its first stage rocket motor.

"Stargazer" was previously based at Meadows Field in Bakersfield, but was plagued with winter fog conditions. I remember inviting Marty Mosier and Mark Gamache (Orbital employees at the time) to speak at Bakersfield Council Navy League in 1998 and during that time I invited them to bring their L-1011 to Mojave Airport. I described our clear blue skies, long beautiful runways and friendly management. Next thing I knew they were on the phone to Airport General Manager Dan Sabovich. One thing led to another and now they call Mojave Airport home.

"Stargazer" is the last flying Lockheed L-1011 in the world and carries a beautiful new paint scheme with Northrop Grumman boldly displayed on the fuselage.

Scaled Composites Model 281 Proteus first flight was July 26, 1998. It is a tandem-wing high-altitude long endurance aircraft designed by Burt Rutan to investigate the use of aircraft as high altitude telecommunications relays. The Proteus is a multi-mission vehicle able to carry various payloads on a ventral pylon.

In October 2000, Proteus set three world altitude records for an aircraft in its weight class. The first records were for a peak altitude of 63,245 feet and sustained horizontal flight at 62,385 feet.

White Knight first test flight was August 1, 2002. It was designed to carry and launch SpaceShipOne, a manned sub-orbital spacecraft, to an altitude of 49,000 feet, the White Knight mothership was an integral part to Scaled's success in winning the Ansari X-Prize. Utilizing identical systems between both White Knight and SpaceShipOne, all spacecraft systems, aside from the rocket propulsion system, were able to be flight qualified before SpaceShipOne took to the air.

First captive carry flight of SpaceShipOne with mothership was May 20, 2003. First powered flight was on Dec. 17, 2003, the 100th anniversary of the Wright Brothers flight at Kittyhawk, and was piloted by Mike Melvill.

SpaceShipOne was developed by Mojave Aerospace Ventures (a joint venture between Paul G. Allen and Scaled Composites, Burt Rutan's aviation company, in their Tier One program), without government funding.

Mike Melvill piloted SpaceShipOne on its first flight past the edge of space (100 kilometers or 62 miles), Flight 15P, becoming the first commercial astronaut and the 434th person to go into space.

The Ansari X-Prize competition would award a prize of $10-million to the first company that can launch a human piloted craft above 100 km (where space officially begins) twice in a two-week period. There were 27 teams competing for the $10 million prize. The teams ranging from Argentina, Canada, Israel, Romania, Russia, Britain and the United States. 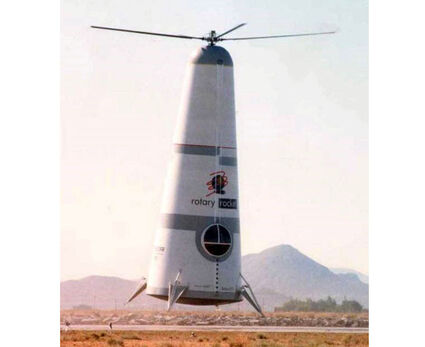 On Oct. 4, 2004, Brian Binnie rocketed SpaceShipOne into history, becoming the first private manned spacecraft to exceed an altitude of 328,000 feet twice within the span of a 14-day period, thus claiming the $10 million Ansari X-Prize.

In addition to meeting the altitude requirement to win the X-Prize, pilot Brian Binnie also broke the Aug. 22, 1963 record by Joseph A. Walker, who flew the X-15 to an unofficial world altitude record of 354,200 feet.  Brian Binnie's SpaceShipOne flight carried him all the way to 367,442 feet or 69.6 miles above the Earth's surface.